“This offseason, my numbers from this year are going to count, so why focus on what’s going to happen then instead of what’s happening now?

... We’ll see what happens. There haven’t been any talks, so we’ll see.

... There’s just been zero talks. When the offseason comes, it comes and we’ll hear what other teams and everybody else wants to say.”

On the one hand, this sounds like a player who's got his mind in the right place and is focused on the right things.  He's not worried about his contract situation.  On the other, it does sound  to me like D-Rob might not be totally happy that there haven't been any talks at all.  He did say "it's not my call" when asked if he preferred to wait until the offseason to discuss an extension.  On a human level, I could understand him being a bit frustrated if he's communicated that he wants to stay a Yankee and hasn't had anything reciprocated by the team.

For as much as people want to say that giving big money, multi-year deals to relievers is dumb, D-Rob is going to get some big offers if and when he hits the open market this offseason.  He's proven himself to be more than capable of replacing Mo as the closer and Dellin Betances' presence shouldn't be justification for letting him walk so much as motivation to retain both and have the final 2-3 innings of games locked down for the next few years.  The team didn't engage Brett Gardner during the season last year and worked out an extension with him.  I certainly hope they're planning to repeat that strategy with D-Rob this year.
Posted by Unknown at 4:00 PM No comments: 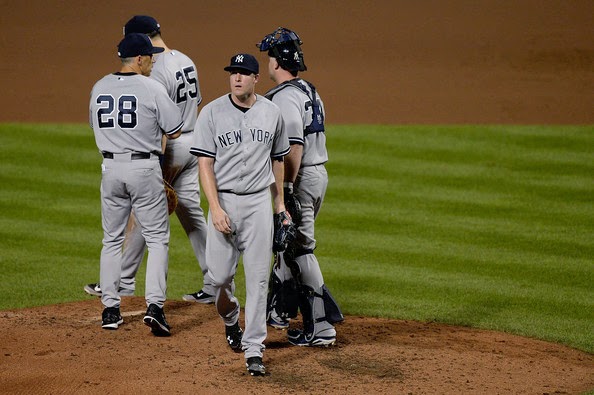 Some Random Yankee-Centric Numbers At The Break

- Of the 41 other starts, 40 of them have been made by pitchers with a combined 26 career starts before this season.

- 23 of those 26 career starts belong to David Phelps.

While the eyes of the baseball world were on the Home Run Derby last night, the Yankees were conducting a bit of roster business in preparation for the second half of the season.  Alfonso Soriano was released outright after being designated for assignment on July 6th.  To no one's amazement, nobody wanted to trade for a washed up outfielder with no bat speed.  They also sent Bryan Mitchell back down to Triple-A, leaving them with 24 men on the active roster.

For Soriano, this is a sad way to end his second stint in pinstripes.  He was electric upon his initial return last year, smacking 17 HR in less than 60 games to give fans something to cheer about.  That success did not carry over to this season, as his .221/.244/.367 slash line and career-worst 29.8% K rate said more about what he had left in the tank than any of his words ever could.  I have to think this move will lead to Soriano announcing his retirement after this season.

As for the roster spot, I hope it's for another starting pitcher.  The Yanks cannot continue to let Chase Whitley work as a starter, even with Tanaka out, and that's something I'll discuss in greater detail later this morning.  They should move him back to the bullpen and replace Mitchell with a new 5th starter.
Posted by Unknown at 7:31 AM No comments: