Did this feel like a slow week to anybody else?  Like painfully slow?  My body feels like it should be late Saturday afternoon already, and for all they did on the field, the news and coverage of the Yankees this week seemed to be lacking.  Really killed my blogging vibe, brah.  Whatever.  Onto the links!

- On Tuesday, Daniel Burch of The Greedy Pinstripes made his case for dumping Kelly Johnson and trading for Martin Prado.  Not a move I'd make, but to each his own.

- Jesse Schindler of Pinstripe Alley wondered if it was time to call up Jose Pirela.  I wouldn't hate it if it was.

- On Wednesday, William Juliano of The Captain's Blog commented on the Yankees' poor team defense and how it speaks to the half-hearted attempts to build a truly contending ballclub.

- Mike Axisa of RAB broke down the potential trade targets among the Cubs pitching staff.  What the hell?  I'd make an offer for Shark.

- SJK of NoMaas made his picks for who he'd dump and who he'd call up to shake up the offense.

- William Tasker of IIATMS/TYA talked about how the advancements in baseball coverage and analysis have changed the kind of fan he is.  I think it's something a lot of us can relate to.

- On Thursday, Chad Jennings of LoHud had another big batch of Minor League news and notes.  Everything that's going on with everybody.

- On Friday, Chris Mitchell of Pinstripe Pundits looked into the possibility that Vidal Nuno could improve and unfortunately came up empty.  Might as well get used to him, folks.

- El duque of It Is High... lamented the lost luster to this weekend's Yanks-Sawx series.  I hadn't really thought about that until now, but yeah.  Both these teams do kinda suck.

Got some "Evil Eye" by Fu Manchu as this week's Friday jam.  Yep, the vibe's back.

Enjoy your weekends, everybody.
Posted by Unknown at 2:04 PM No comments: 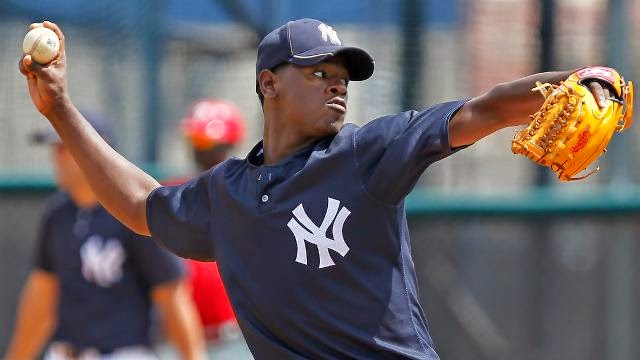 Friday Morning Food For Thought: Did The Yanks Screw Up?

Joel Sherman wrote an article on Tuesday examining the Yankees' decisions to sign Jacoby Ellsbury, Brian McCann and Carlos Beltran instead of re-signing Curtis Granderson and Robinson Cano, and how those decisions may be backfiring this year based on each player's production.  It's tough to come up with a fair way to compare 3 players to 2, especially when the positions they play don't match up, but just for the sake of Sherman's argument take a look at this:

Factor in the boost that both Cano and C-Grand's power numbers would get if they were still hitting in YS3, and for this year alone the argument can be made that the Yanks would be in better shape offensively if they had brought back their own.  Not that that means much for the future.  C-Grand could lose his power soon, Cano could start to, Ellsbury could have a hot second half, and McCann has to figure it out sooner or later.  If Beltran doesn't crash over that wall in Tampa and have his elbow issue, who knows how much better his numbers would be.

The points is that there's a lot of baseball left to be played for a lot of years by all of these guys.  Not that Sherman was implying it, but there's no need to be calling last offseason's decisions bad ones or mistakes a few games short of the 2014 midway point.

Posted by Unknown at 7:48 AM No comments: