Casting Call For The Rotation

Starting tonight, auditions will be underway for spots in the soon to be 5-man rotation for the rest of the season.  CC is a shoo in, Bartolo and Nova punched their tickets yesterday, so now we're down to 3 men for 2 spots.

In all honesty, Freddy Garcia and Phil Hughes probably have to do very little to get the nods over A.J.  As long as they manage to get an out or 2 and not allow infinity runs, that should probably lock it up.  And with the way the Yankees have set things up for this week (Freddy tonight, CC tomorrow, Phil Wednesday, and A.J. Thursday), it's almost as if they are stacking the deck in Freddy and Phil's favor.  Freddy gets to face the lesser lineup in his first game back from the DL, Phil stays on his regular rest to prove that his last outing was a bump in the road and not a sign of regression back to his early-season issues, and A.J. effectively gets thrown to the wolves in facing the best offense in the AL so he can continue his bombshow and put the final nail in his rotation coffin.

That being said, this scenario isn't exactly a slam dunk.  Freddy wasn't that great in his Triple-A rehab assignment, and Phil was pretty awful in that last outing against the weaksauce A's lineup.  And bad as they are, there are some good professional hitters in the Baltimore lineup that could punish Freddy if he's off, and the Fraud Sawx lineup won't hesitate to do the same to Phil if he's missing his stuff, command, or both on Wednesday.  Realistically, Freddy and Phil should be doing battle for the 4th postseason rotation spot over the course of the next month.  But with all the chances that Joe has given A.J., and the fact that he and Cash continue to defend A.J. in front of the media, there does exist that minuscule, microscopic chance that a couple of stinker outings from Garcia and Hughes this week could leave the door open for A.J. to get another chance.  And for that reason, it's critically important that Garcia and Hughes go out and at least be mediocre.

On a personal fan note, I'm very interested/scared to see how Hughes fairs on Wednesday.  Best lineup he's faced, coming off a bad start, nationally televised game.  How he pitches could be a big determining factor for how the Yanks plan to use him in the playoffs.  Add all that together and I think I smell another AB4AR live blog on Wednesday night.
Posted by Unknown at 3:17 PM No comments: 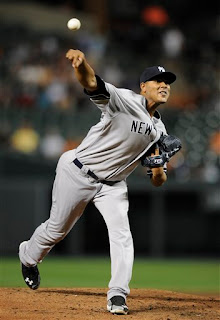 After both of their performances yesterday, we can safely say that both of those guys will be part of the 5-man rotation moving forward.  But more than that, I think after what they showed yesterday, both Colon and Nova have locked up spots in the playoff rotation and further solidified the possibility of A.J. Burnett being on the outside looking in.

Colon, whose recent struggles have been well documented, had a great bounce-back start yesterday afternoon, throwing 7.2 innings of 2-run ball.  He was back to using and locating his 2-seamer well, and he worked much more efficiently than he has in the past couple months, throwing just 70+ pitches through the first 6 innings of work.  Colon started to wear down a bit in the 7th, when he allowed his first run, and his final line got hurt a bit by Joe trying to stretch him to get through the 8th, but it was a performance reminiscent of his early-season starts.  Colon was sharp, had good stuff, good command, and showed that he can still be effective.  In the postseason, he probably comes out after 7 innings of 1-run ball, and in the postseason the Yankees will be happy to get that kind of output from a starting pitcher.  But to see Colon get back to what has made him successful all season and show that he still has something in the tank was very important.

After Colon's solid outing, Ivan Nova continued his recent historical run in the nightcap, and the manner in which he did it was made his start that much more impressive.  Nova was not on his game early, allowing 1 run in each of the first 3 innings, missing his spots, and not looking sharp at all.  From then on, however, he was money.  He found the command of his fastball and used it to get ahead of hitters and found his slider to use as an out pitch to put guys away.  Through the first 3 innings, Nova allowed 5 hits and all 3 of his runs while striking out 2.  In the 4+ innings after that, Nova gave up just 2 hits and 2 walks (1 of each in the 8th when he was gassed), 0 runs, and struck out 5.  It was, in effect, a reverse A.J. Burnett-style start; early on Nova didn't have command of anything and got punished for it, but he was able to bear down, find his command, and work effectively through the next 4 innings to hold the opponent where they were and give his team a chance to win.

And what makes it even better is the fact that Nova recognized there was a problem early on and he fixed it.  He exhibited the wherewithal usually reserved for veteran pitchers and turned what could have been a disastrous outing into a quality one and a win for him and his team.  And he continued to show both the physical and mental development as a pitcher that has made him such a quality starter over the last few months.

Stuff, command, pitching intelligence, and mental toughness are all important to being a successful Major League starting pitcher, and yesterday Bartolo Colon and Ivan Nova showcased all 4 of those qualities in different ways in turning in 2 quality starting pitching performances.  With all the uncertainty surrounding the Yankee rotation for the rest of the year, yesterday they helped to provide some stability and should secure their spots for the rest of the regular season and beyond.
Posted by Unknown at 8:53 AM No comments: