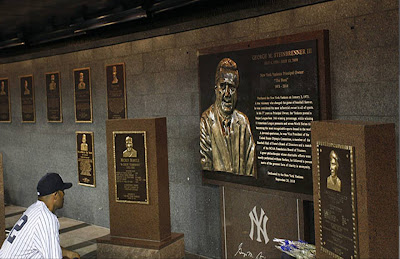 (Photo courtesy of Jeff Zelevansky/MLB.com)
Is that one of the coolest, most touching sports photographs ever?  I believe it is.  If you don't get a little misty looking at that, then you aren't a true Yankee fan.
Posted by Unknown at 1:49 PM No comments: 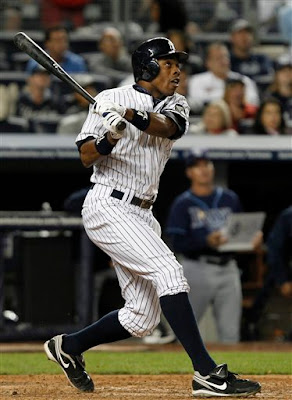 (Photo courtesy of The AP)
2 homers and 5 RBIs, eh?  Don't look now, but I think we found our #2 hitter for the rest of this year and next year.

I stayed away from all the C-Grand bashing when he was struggling because it was obvious the lost time because of the injury affected him.  Now he's back to 100% and he's worked with Kevin Long to fix his swing and he's straight up mashing shit right now.  This is the guy we all hoped we were getting after the trade and this is the guy who is going to be very dangerous for the rest of this season and into 2011 when he'll try again for what should be an easily attainable 30-30 season playing in The Stadium.

Grandy's now hitting .274/.369/.578 with 11 homers and 26 RBIs in 149 plate appearances since he swallowed his pride and came to Kevin Long.  If he can keep this up down the stretch, the lineup becomes much more dangerous, even with Jeter leading off instead of Gardner.

P.S.- How bad do you think Matt Garza's nightmares of Granderson were last night?  20 bucks says he wet the bed at least twice in his hotel room.
Posted by Unknown at 9:55 AM No comments: