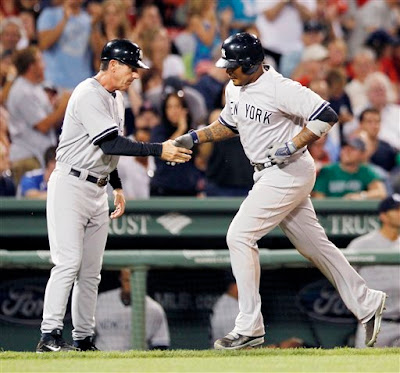 I wanted to get greedy and have the Yankees take both games yesterday after they cruised to a 6-1 win in the first half of the doubleheader, but I'll take a split.  It still leaves them 1 up in the series after winning Friday night's game and still leaves them with an opportunity to take 3 of 4 with tonight's game still to be played.

- The Yanks got 5 in the 1st off of Beckett to kick off Friday night's game and got 4 in the 1st yesterday off of Franklin Morales on back-to-back Nick Swisher (3-R) and Andruw Jones (solo) HRs.

- They extended the lead to 6-0 in the 4th when they went back-to-back again, Jones starting it this time and Jayson Nix finishing it.

- Freddy Garcia was fantastic in just his 2nd start back in the rotation.  He held Bahhston to just 1 run through 6.2 innings of work.  His stuff looked good, he was efficient, and he struck out 5 and didn't give up a lot of solid contact.

- The offense got nothing against reliever Justin Germano after they knocked Morales out, but they didn't need any more.  Garcia was solid, and Cody Eppley and Chad Qualls combined for 2.1 scoreless innings to finish out the win.

- The Yanks got yet ANOTHER early lead in the second game on a Mark Teixeira 3-run homer in the 1st.  That's 12 1st-inning runs in this series in 3 games.

- Hughes' defense didn't do him any favors behind him.  Errors by Darnell McDonald in the 5th and Derek Jeter in the 6th kept innings alive for Bahhston and drove up Hughes' already high pitch count.

- Boone Logan and Cory Wade combined to give up 4 more runs in the 7th to put the game out of reach.  Logan looks shot at this point after being used in over half the team's games to date, and Wade still looks very hittable.  He'll be back in Triple-A today.

- Jones hit his third HR of the day in the 7th, and Eric Chavez hit one in the 9th to bring the final score to 9-5.  After scoring 10 runs on 0 homers on Friday, the Yankees scored all 11 in both games yesterday via the long ball.  Crazy.