Yanks DFA Nunez To Clear A Roster Spot For Solarte 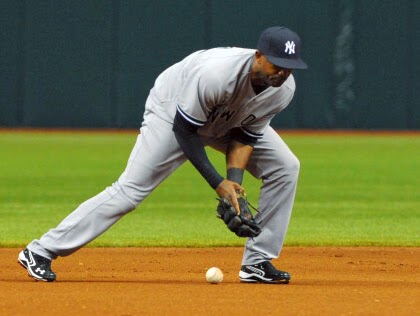 In retrospect, I think we should have all seen this coming.  As first reported by Mark Feinsand, the Yankees have designated Eduardo Nunez for assignment in order to open up a spot on the 40-man roster for Yangervis Solarte.  It started late last week when Solarte was announced as Joe's pick for the final bench spot, it continued earlier today when Solarte was given Nunez's number 26, and it concludes with this roster move.

The move comes as a bit of a surprise based solely on Nunez's tenure with the team.  As recently as a week ago he looked like the odds-on favorite to win the final roster spot, but I guess his ST performance that was right in line with the consistently below-average production he's had his whole Major League career was the final straw.  The bottom line is the guy didn't hit and didn't field.  You have to be able to do one or the other to stick and the Yankees gave him plenty of chances to prove that he could.  We'll see where Nunez goes now, but this move has to all but signal an end to his Yankee career.
Posted by Unknown at 3:27 PM 2 comments:

As much as I loved Joe's decision to bring Nuno north as part of the Major League bullpen and still think it was the right move, I'd be remiss if I didn't touch on the somewhat alarming transformation the RailRider rotation has undergone in the past month.  Turley and Ramirez have been down and out with injuries since early in spring camp and Ramirez will be converted to a reliever when he's healthy again, ManBan will start the year in High-A Tampa to knock some of the rust off, and with Nuno in the Yankee 'pen there is suddenly very little organizational depth behind the Yankee starting 5.

Now ManBan will make it back to Triple-A eventually and hopefully Turley's arm tightness doesn't turn into an eventual elbow or shoulder surgery, but it's still a night and day difference between what was supposed to be and what is.  No offense to any of the non-Greene members of the current SWB rotation.  They're all pros and I'm sure they'll do a fine job filling in.  It's just hard to get excited about a group of 30-something journeymen in a Triple-A rotation when the alternative was 5 legit prospects.  If an injury or 2 does happen in the Major League rotation, I'd rather see a Nuno or a Turley or even ManBan subbing in for spot starts than Aceves or Billings.  At least there's something to get excited about if the prospects do well and it's easier to chalk it up to lack of experience if they don't.
Posted by Unknown at 12:35 PM No comments:

Joe announced this yesterday, but here's the starting lineup that will take the field tonight:

A couple thoughts.  Not sure how I feel about Teix hitting 5th when he's admittedly not swinging normally.  I'd rather see him 6th.  And it's a little surprising to see Gardner 7th and Johnson 9th.  Johnson's lefty power after Soriano's righty power makes more sense in the 7-spot, but Joe must have something in mind so I'm willing to see how this lineup works before questioning the decision.
Posted by Unknown at 10:00 AM 2 comments:

It's finally here.  It's been 6 long months since the Yankees last played a meaningful baseball game and that game marked the end of the legendary career of Mariano Rivera.  Today marks the start of the season-long farewell to his Core Four teammate and Yankee captain Derek Jeter, but more importantly it marks the start of another season of Yankee baseball.

The offseason was a busy and productive one.  This year's team looks a lot different and potentially a lot better than last year's.  Will it be enough to get back to the postseason and chase title number 28?  We start finding out today.  Happy Opening Day, everyone.  And let's go Yankees!