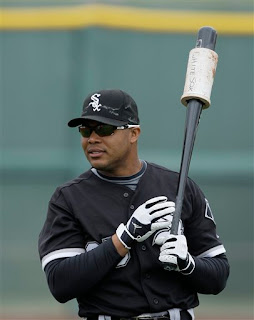 I don't remember where I read it, but I remember seeing something about the Yankees "starting talks" with Andruw Jones about joining the team to become the 4th OF and fill the void left by Marcus Thames most likely going to Japan to become the new Mr. Baseball (minus the awesome Selleck mustache).

For a guy who seems to be a shell of his former self, I actually think Jones is an ideal candidate for the Yankees 4th OF spot in 2011.  Nothing jumps out at you initially when you look over his 2010 numbers, but notice that he managed to get an .827 OPS out of a .230 BA, a sign of both patience and power at the plate, 2 things that the Yankees would both want and need out of their bench.  Jones' tripleslash jumps to .256/.373/.558 against lefties last season, another gap the Yankees need filled and another one that Jones should be able to do just as well, if not better, than Thames did last season.  Factor in that Jones is still a very competent defensive player in the outfield and not an abortion like Thames was, and there is really no downside to bringing Jones into the fold.

It's no secret that the Yankee outfield is set with Swish, Gardy, and C-Grand.  They are all productive bats in their own way and combine to make one of the best defensive outfields in baseball.  But all 3 of them missed some time with injuries last season, and it would be nice to be able to plug in one guy and feel confident that he can do the job should somebody go down for some time instead of having to play Russian Roulette with Triple-A guys like last year.

He might not be the all-world center fielder he used to be, and he might be a bit more pudgy than we remember from his Atlanta Brave days, but Andruw Jones is still an above-average outfielder who could play right, left, a/o center very easily.  And he's clearly the lefty-mashing bench bat that the Yankees would like to have available off the bench.  He had a limited role in Chicago last season so bitching about playing time wouldn't be an issue.  As it becomes more and more likely that Andy isn't returning, the Yankees still have plenty of money to burn.  If they use some of it to sign Andruw Jones, count me in as one of the people who will applaud the move.
Posted by Unknown at 6:13 PM No comments: