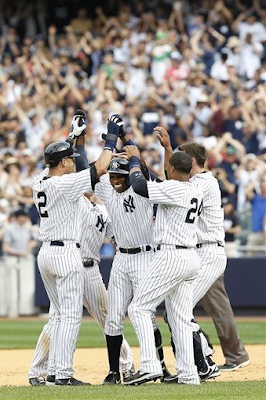 Alfonso Soriano back in the mix on Friday, Derek Jeter back in the mix on Sunday, Hideki Matsui back in The Stadium to officially retire as a Yankee.  It was a regular early 2000s Yankee reunion in the Bronx this weekend!  All kidding aside, getting Jeter back and adding another good righty bat to the lineup is a big deal for the Yankees and it could be an even bigger deal if he can stay healthy, be productive, and bring a little life to this ballclub and The Stadium.  The Captain did just that and more today, starting things off with some vintage Jeter fireworks and, along with Soriano, sparking the Yankees to a much needed victory in the finale of this tough 10-game post-ASB stretch.

- So yeah, about those fireworks.  Jeter stepped in against Tampa starter Matt Moore in the bottom of the 1st and hit the first pitch he saw - a belt-high fastball - just over the fence in right field for a solo HR.  It was another storybook moment in a career full of them and it led to 2 more runs on 3 more hits in the inning.

- Unfortunately, Phil Hughes wasn't up to the task of holding a lead today.  He gave up a run on an RBI double in the top of the 2nd, then a 3-run HR to new Yankee killer in the making Wil Myers in the 3rd to turn the 3-0 lead into a 4-3 deficit.

- Not to be defeated by Hughes' suckiness, Jeter and Soriano went back out in the bottom half and regained that lead.  Jeter led off with an infield single and with 1 out, Soriano hit a Moore fastball out to right for a 2-run dinger.

- Hughes gave up another HR to Myers to start the 5th, walked the next hitter, and his day was done after 4 innings.   2 straight outings where he got the quick hook.  Same story as it always is with Phil; he just couldn't command his fastball.

- Things quieted down offensively as the game moved to the late innings.  The Yankee 'pen (Preston Claiborne, Boone Logan, David Robertson, Mariano Rivera) was dynamite, allowing just 1 hit and no runs in 5 innings relieving Hughes, and they set the stage for some 9th inning dramatics.

- Brett Gardner worked an 8-pitch walk to lead off the 9th, moved to second on a wild pitch, and after an intentional walk of Jeter and a strike out of Robinson Cano, Soriano came to the plate.  He was looking first-pitch fastball and he hit it back up the middle for the game-winning walk-off single.  Big hit, big moment, big win.

The Captain Returns To The Lineup Today

That's the starting lineup for this afternoon's series finale against Tampa.  And while the bottom half of it is still as ugly and most likely as unproductive as ever, there's a familiar name back at the top.  Derek Jeter came through yesterday's sim game without issues, was cleared to play, and is back at his starting shortstop position today.  It's unknown how much he'll contribute, and I'm on the record as being very pessimistic about how the rest of the season is going to play out for him, but with as bad as this team is playing and as quickly as they seem to be going nowhere it's at least something.  He's still my favorite player of all time and he's always going to be.  I hope he can stay healthy and stay on the field for this whole game and the rest of the season.