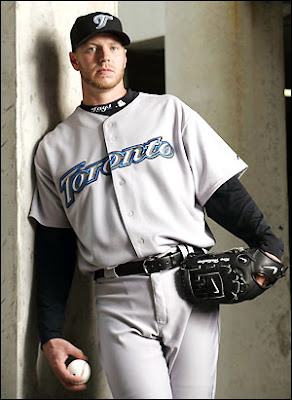 So the big buzz around the baseball world today is that the Sawx are "putting on a full-court press" to try to acquire Roy Halladay and bolster their pitching staff for next year.  In the words of the great Matt Foley, motivational speaker, "Well LA-DEE-FREAKIN'-DAH!!!"

As if using an aggressive man-to-man pressure defense is really going to work to bring in the guy that they coveted most during this past season's trade deadline but didn't have the stones to pull the trigger on because they didn't want to give up any of their prized prospects.  Newsflash, Theo. Toronto's asking price isn't going to be any lower this time than it was a few months back, so unless your "full-court press" includes kidnapping Halladay's family and threatening their lives, you might as well start cleaning out Clay Buchholz's and Daniel Bard's lockers now if you're serious about this.

And even if Boston does make this deal, are they expecting the Yankees to suddenly shit their collective pants?  Like Brian Cashman is going to wake up on December 5, read the headline on ESPN.com that the Sox made the deal and simultaneously hit the panic switch with his left hand while he frantically searches for the cell phone to start calling Randy Wolf's agent with his right?  Puh-fucking-lease.

If this past season proved anything, it's that the Yankees are the deeper, more talented team across the board than the Red Sox, and adding Roy Halladay makes them only marginally better than the Yankees at best.  The back end of Boston's rotation has just as many question marks as New York's does, and with Josh Beckett looking like he may have already peaked in his career, throwing him in with Halladay and Lester as a great trio of starting pitchers is like saying store brand cranberry sauce is one of the premiere Thanksgiving foods along with Turducken and homemade pumpkin pie.

And that's not even factoring in the undeniable reality that the Yankees' bullpen is deeper and more clutch than Boston's and that Boston's lineup has aged far less gracefully than that of the Bombers.  Jeter, A-Rod, Hideki, Damon, and Matsui are like the finest of fine wines when compared to the spoiled milk that is Boston's 30-something collection of Ortiz, Lowell, Drew, and Varitek (if they're dumb enough to bring him back).

So go ahead, Theo, make your move on Halladay.  Cash, Hank, and Hal will only be too happy to watch you give up 3 to 4 blue chippers just to try to pull back even with the Yankees.  I don't think even Bill James can concoct some formula to figure out how Halladay will help your bullpen from imploding in big moments or your rapidly aging (and even more rapidly declining in production) lineup from continuing their downward trend.  And if you want to get it done before the winter meetings, be my guest.  That just gives the Yankee minds more time to come up with a counter-strategy.

It really doesn't make a shit of a difference if you put on a full-court press, half-court trap, or a matchup zone to get Halladay, because while you're out there flailing and flapping like Forrest Griffin, the Yankees are sitting back, letting things play out with their free agents and biding their time to make some late-offseason moves, and readying up that counterpunch right hand to floor you like Anderson Silva.

Posted by Unknown at 1:14 PM No comments: