Bring Out The Meat Wagon 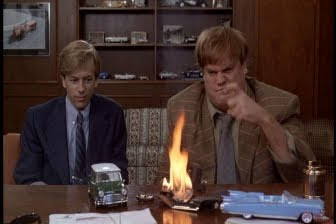 WEEE-OOO, WEEE-OOO, WEEE-OOO!!!!  After yesterday's game, the Huskies are the family rolling around on the ground burning alive and us fans are the paramedics standing there going "Oh my god!"  It was the perfect microcosm for what this team is and how this season is going to play out.  Considering I made my pick for UConn to go 22-6 and finish 3rd in the Big East and they have yet to play Syracuse, West Virginia, and Villanova in the conference, you can pretty much take my prediction and flush it down the toilet like the big piece of shit that it is.

Yesterday was a classic tale of 2 halfs, both of which showcased the 2 versions of the UConn team that everybody is used to seeing.  In the first half there was ball movement and player movement on offense; guys were working the defense and finding the open man; guys were knocking down open shots; there was tough defense and great rebounding, keeping the ball out of Greg Monroe's hands, keeping a hand in the shooters' faces, and not giving up second chances on the offensive glass; and the transition game was flat-out running Georgetown off the floor.  The Huskies were looking to push after every steal, every block, and every rebound, and showed that they were the much quicker, more athletic basketball team.

Stanley Robinson epitomized the way the team played in the first by being the catalyst for all the good things they did.  He was everywhere: slashing to the hoop for alley-oop and putback dunks, knocking down 3-pointers, playing great man-on-man and help defense, and grabbing big rebounds to start fast breaks.  They way he played in the first half, you would think he's a top-5 lottery pick this summer.

In the second half there was none of that.  Shots stopped falling; players stopped cutting and moving the ball; Kemba Walker went from running the offense to running around like a guy whose head was on fire; the defense broke down and got beaten so badly off the dribble that even Rihanna cringed at the sight of it; nobody helped when guys did penetrate the lane and nobody rotated to open shooters; the rebounding broke down and the Hoyas got many more second chances on possessions when they didn't make shots (which were few and far between).  Basically everybody pussed out when they realized the Hoyas weren't going to lie down and die and nobody had the balls to bring the team together and get re-focused.  And to top it all off, just so we could all feel like we had seen this before, the Huskies were horrid from the line, clanging over half their FT attempts.

Much like the first half, Stanley Robinson was the perfect representation of how shitty UConn played in the second half.  After exploding for 12 and 7 in the first half, he finished with just 16 and 8, completely disappearing offensively and becoming a human turnstile defensively, as he continued to go under picks to give Austin Freeman open looks.  As usual, when the going got tough, Stanley got going...to nowhere.  Instead of stepping up like a senior should, he shrank into the background and watched his team collapse around him.

Sure it didn't help that Kemba Walker ran the offense like Isaiah Thomas when he froze out Jordan in the All-Star Game, but as a senior Stanley needs to call for the ball, demand it, and find ways to get it in his hands when his teammates are failing in that aspect.  Instead he sulked around the court like a zombie and when he did the get ball, his shot inexplicably became flatter than 10-year-old tits, bouncing off the rim so violently that I was concerned for the safety of the Georgetown players trying to catch the rebounds.  After watching him play in the 2nd half, a scout with any sense wouldn't even consider signing Sticks to a D-League contract.

The most maddening thing about this game was that it still leaves everybody wondering which team is the REAL UConn Huskies.  Are they the run-and-gun, athletic-as-fuck team who can defend anybody and then turn turnovers and bad shots into fast break layups and open transition 3-pointers in the blink of an eye?  Or are they the team that folds when their opponent goes on a run, forgets to play defense and rebound in critical moments, and can't run a good half-court set or make 2 free throws to save their lives?

It's halfway through the season and this team still has no identity.  There has been no noticeable change or improvement in the team's attitude, approach, or execution.  You'd like to think the players would take it upon themselves to get better and fix their mistakes, but that clearly isn't going to happen with this team because there are no leaders, so the responsibility and blame has to fall on the coach.

I love Jim Calhoun, don't get me wrong, but his 'yank guys constantly for the smallest mistakes even though that sometimes leaves you with a crappy lineup on the floor,' and 'sit or stand with your arms crossed and a vanilla look on your face while your team completely self-destructs'-acts are starting to get a little old.  As the head coach, he's supposed to have his team prepared for each game, but each game this team looks just as clueless as the last.  They can't figure out how to work the ball and get open shots against a zone, and their man-to-man offense still consists mostly of some combination of Kemba, Dyson, and Sticks swinging the ball around the perimeter and then Walker (who, by the way, is no longer Black Jesus) or Dyson driving aimlessly to the hoop for a contested layup or runner.  There's no entry into the post, no inside-outside game, no drive and dish, no give and go.  WHAT THE FUCK ARE YOU WORKING ON IN PRACTICE?!?!?!?!  Worst of all, when everybody starts to fall apart mentally, Calhoun is nowhere to be found to pick up the pieces and get them back together before the game slips away from them.

Calhoun needs to wake the fuck up and realize that there aren't any Ray Allens or Khalid El-Amins or Emeka Okafors on this team.  These kids aren't tough, they aren't smart, and they aren't mature; they NEED to be coached, need to have everything explained and diagrammed for them, and need to have their hands held and fragile egos stroked at all times.  It's the coach's job to recognize what he has in front of him and what he has to do to maximize that talent and potential, and right now Jimbo is doing a shit job at that.  He needs to roll up his sleeves, loosen the tie, and do some fucking work with these guys or this team is going to continue down the path it's put itself on after yesterday, and that's a path to nowhere.
Posted by Unknown at 10:54 AM No comments: