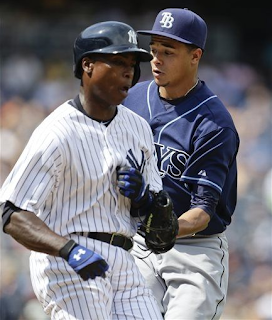 Alfonso Soriano or no Alfonso Soriano, the lineup supporting Ivan Nova this afternoon didn't look any better than it has in weeks past.  There still wasn't any real support behind Robinson Cano, there wasn't power or patience to be found anywhere, and the bottom third was a fallout zone with Chris Stewart getting the start over a heating up Austin Romine.  The effort by the front office to make this team better isn't there, it hasn't been there since the season started, and that lack of effort was on display again today as the Yankees got completely outclassed by a rookie starting pitcher.

- Nova could best be described as inconsistently dominant through 5 innings.  He put 2 runners on in the 1st and worked around it by retiring 7 in a row, then did the same to lead off the 4th before striking out the side swinging on curveballs.  He didn't allow any runs either.

- Tampa starter Chris Archer matched him zero for zero, and did it on an unfathomably impressive 49 pitches through 5 innings.  The Yankees were aggressive but didn't manage a single hit off him until a Lyle Overbay single in the 5th.

- Walking the tighrope finally came back to bite Nova in the 6th, when a 2-out walk put 2 runners on.  Kelly Johnson singled home a run to put Tampa up 1 before Nova got another K to end the inning.

- Brett Gardner hit a 2-out ground rule double to left for a spark of offensive life in the bottom of the 6th, but Ichiro waved at a 2-strike fastball to strand him.  It's really getting pathetic at this point.

- Joe squeezed another inning out of Nova in the 7th then turned it over to the bullpen to keep the game at 1 run.  David Robertson and Shawn Kelley (next year's closer-setup man tandem??) did just that with 2 scoreless frames and 4 strikeouts.

- Didn't matter.  Archer finished things off himself in the bottom of the 9th - in 1-2-3 order - to secure the complete game 2-hit shutout and do it under 100 pitches. 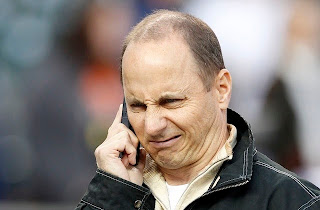 In a story earlier today for The Post, Joel Sherman reported that the decision to trade for Alfonso Soriano was ultimately ownership's decision and one that GM Brian Cashman did not endorse.  Sherman cites 2 non-Yankee executives who said Cash believed the Yankees' cash and prospect assets could be better spent than on Soriano.  While not directly confirming the report, Cash's lengthy statement to The Post in response was telling:

“I would say we are in a desperate time. Ownership wants to go for it. I didn’t want to give up a young arm. But I understand the desperate need we have for offense. And Soriano will help us. The bottom line is this guy makes us better. Did ownership want him? Absolutely, yes. Does he make us better? Absolutely, yes. This is what Hal wants, and this is why we are doing it.”

It's cleverly stated so that he's not saying anything negative about Soriano or being dishonest about the Yankees' position, and kudos for that.  But that last statement tells the whole story and it's one that continues to be told about the Yankee front office this year.

No Jeter Today, But Maybe Tomorrow

Derek Jeter is eligible to come off the DL today, but won't do so.  Joe informed the media of that decision after last night's game, even though Jeter told reporters Friday that he felt ready to play and reported no problems with his quad (or ankle) after running the bases on Friday.

Instead, the plan, according to Jon Heyman, is for Jeter to play in a simulated game somewhere today and then be activated for tomorrow's game if he comes through the sim game healthy.  That would be a pretty big plus for Jeter and the Yankees after a slow start to his comeback from the quad strain.  Initially the July 27th date didn't even look close to the time he'd be ready to go again.  To only miss by 1 day would be a pleasant surprise, assuming Jeter can stay on the field for more than 1 game this time. 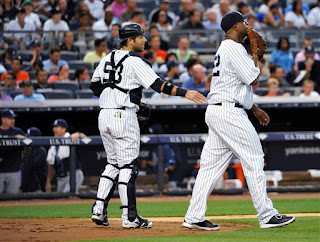 The excitement over Alfonso Soriano's return to New York last night, misplaced as it may have been, didn't last very long.  In fact, by the time he came up for his first at-bat to lead off the top of the 2nd inning, the game was already over thanks to CC Sabathia.  It was another miserable night on the mound for CC, whose lack of command led to 6 runs in the top of the 2nd and a cushion of more than enough runs for Tampa to coast to the finish line.

- The strangest part about the 2nd inning meltdown was that it came after a sharp 1-2-3 1st for Sabathia, including strikeouts of Evan Longoria and Wil Myers.

- Once the 2nd started, however, it was a completely different story.  Just a constant barrage of fastballs and sliders left up in the zone and then deposited to various parts of the outfield.  3 doubles, 3 singles, a walk for good measure, and 6 runs.  The only reason the inning ended when it did was because Myers got greedy trying to stretch a single.

- The Yanks got a single run in 3rd on an Austin Romine RBI single.  They actually put 4 guys on base in the inning, but couldn't push any more across playing station-to-station baseball.

- CC gave up another run in the 5th and left with 7 earned on his scoring line.  Adam Warren came in to handle the mop-up duty and reserve the rest of the 'pen and gave up 3 runs (all on a 3-run HR in the 7th) in 4 innings of work.

- Give the Yankees credit for trying to make it respectable.  They tacked on 2 in the 8th and 3 in the 9th after Tampa starter Jeremy Hellickson left.  David Adams had an RBI single in each inning.

- If you're wondering about Soriano, he went 0-5 with a R scored and an RBI on a groundout in the 9th.  He left 6 men on base hitting from the cleanup spot, so clearly he's already got right back into doing things the Yankee Way.