"Jorge Posada will announce his retirement within the next two weeks, per source."

Can't say this would surprise me.  There really hadn't been much talk of teams interested in Jorge.  Now we can just stay tuned for the official announcement.

How Are Things Going Over At Citi Field This Offseason?

I haven't talked about the Mets in a few months.  What with the Yankees' offseason being so enthralling, I guess I kind of forgot about their little brothers on the other side of town.  But surely, something new and exciting must be going on with that organization that will get their fans stoked for the 2012 season, right?

"The Mets said in a statement Thursday that they had hired CRG Partners, a firm known as a turnaround specialist and bankruptcy consultant, to provide 'services in connection with financial reporting and budgeting processes."

Oh.  Well I guess that's a good thing.  Maybe that means things are starting to turn around for them, right?

"The Mets are certainly under considerable financial pressure.  They lost $70 million last season.  They owe more than $400 million to a group of banks; $40 million to Bank of America; and $25 million to Major League Baseball that is past due."

Yeesh.  That kinda sucks.  But on the positive side, at least Fred Wilpon can check off the last thing on his team's offseason to-do list:

1) Re-design the field dimensions to better fit the mediocre skill set of the team.
2) Make no attempt to better the team at all through free agency or the trade market.
3) Allow the team's best player to walk in free agency without even making an offer just a few months after you could have traded him for valuable prospects.
4) Reduce ticket prices in a last ditch effort to get whatever is left of your rapidly-dwindling fanbase to come back to the stadium in 2012.
5) Hire a well-known firm to help you manage your impending bankruptcy.

That's a hell of an offseason right there if you ask me.  As I stated last night on the AB4AR Facebook page, as a Yankee fan it's always good to know I have the Mets around to put things in perspective for me.  The Yankees are trying to cut costs for 2014 by not throwing huge chunks of money at Yu Darvish or Mark Buehrle; the Mets aren't even making an attempt to sign Jose Reyes.  The Yankees couldn't make a deal with a Japanese player to fill a backup infield role; the Mets are going bankrupt. 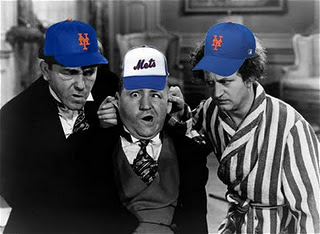 (Quotes courtesy of The New York Times)
Posted by Unknown at 12:13 PM No comments: