Holy piss, is it really November already??  And of course everybody is already skipping over the awesomeness to come that is Thanksgiving and getting into full Christmas mode.  It's lunacy.  Don't get me wrong, I love Christmas as much as the next person, but if you think Christmas is better than Thanksgiving you're wrong.  Thanksgiving is the tits and it deserves its month in the sun, if for no other reason than wall-to-wall football for a day trumps wall-to-wall basketball.  Worry about Christmas when Black Friday rolls around.  Now onto the links!

- On Monday, SJK of NoMaas pointed to the Yankees' good Pythagoran and 1-run luck in 2013 as a reminder that they're worse than an 85-win team that needs an upgrade.

- Stacey Gotsulias of IIATMS/TYA commented on the Yankee Stadium culture change in the new stadium and how that change influenced her decision to not renew her season tickets.  Have to think there's a lot of other fans out there who share her sentiments.

- On Tuesday, Mike Axisa of RAB proposed the idea of locking up David Robertson long-term and why it would be better to do it now before he becomes the team's new closer.

- On Wednesday, Matt Bove of The Greedy Pinstripes compared Shin-Soo Choo and Carlos Beltran as possible OF free agent targets.

- Chad Jennings of LoHud reviewed the current organizational depth in right field.  At this point in time it's not looking good for next season out there.  Definitely in need of an upgrade.

- Alex Pugliese of Yanks Go Yard pointed out that Joe Girardi has his work cut out for him now that he's re-signed, and suggested his toughest challenges as Yankee manager are still to come.

- El duque of It Is High... lamented the polar opposite directions in which the Yankees and Red Sox are heading as organizations in the wake of Boston's latest World Series title.

- On Friday, Derek Albin of Pinstripe Alley mused on the possibility of dangling Brett Gardner as trade bait this offseason.  I mentioned him in reference to the Cards earlier in the week, but if there are other teams that would be interested, the Yankees should be open to the idea.

Going back to some old school hip-hop for this Friday's jam with "Can I Kick It" by A Tribe Called Quest.  If this doesn't make your head nod even a little bit then I feel bad for you.

Yankees today announce that they have re-signed Derek Jeter to a one-year, $12 million contract for the 2014 season.
— Yankees PR Dept. (@YankeesPR) November 1, 2013

Well I guess that answers that question about whether Jeter was going to exercise his player option or not.  Turns out he didn't have to because the team just announced that they've re-signed him to that new 1-year deal referenced above.

I don't really know what to say about this.  On the surface it doesn't make sense to add money to next year's payroll when the team didn't have to.  Jeter's 2014 option was for $9.5 mil and I was under the impression that as an option year that value would stand alone in terms of AAV.  I'm sure the Yankees know what they're doing and an explanation will come out, but for now this comes as a surprise.

** UPDATE 12:28 PM- Via Mark Feinsand, this new deal actually saves the Yankees a few bucks in terms of AAV.  Triggering the option year would have made his AAV $14 mil for next year based on the whole contract.  By wiping that out and going with the new 1-year, $12 mil deal, the Yankees save $2 million towards the luxury tax.  Pretty shrewd move on their part. **

** UPDATE 1:02 PM- Via Andrew Marchand, this new deal came as a result of Jeter and Hal having direct conversations.  Once again, Cash left out of the decision-making mix. ** 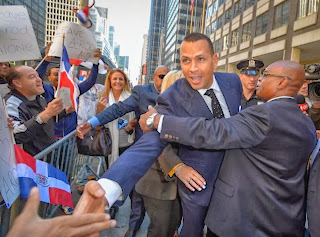 There are a lot of words you could use to describe the back-and-forth mud slinging in the media between Alex Rodriguez's legal camp and Major League Baseball right now.  Hilarious, ridiculous, and pathetic are a few that come mind.  But how about problematic?  While the verbal haymakers being thrown don't appear to have much impact on the Yankees as a team, the dragging out of the process is going to become a big problem now that the offseason and free agency have started.

Who knows what's going to happen with Alex's "witch hunt" lawsuit against MLB.  I'm sure he and his lawyers thought filing it would help strengthen their suspension appeal case, but with the way things are going between both sides in the media you have to think the arbitrator won't be swayed too much by it.  The real concern from the Yankees' perspective is the appeal hearing and the still lengthy amount of time until it starts again.

The Latest From The A-Rod-MLB Battle Front

“I am deeply troubled by my team’s investigative findings with respect to MLB’s conduct.  How can the gross, ongoing misconduct of the MLB investigations division not be relevant to my suspension, when my suspension supposedly results directly from that division’s work?”

“This latest, sad chapter in Mr. Rodriguez’s tarnished career is yet another example of this player trying to avoid taking responsibility for his poor choices. Given the disappointing acts that Mr. Rodriguez has repeatedly made throughout his career, his expressed concern for young people rings very hollow.”

Between these jabs and the previous day's verbal sparring session between Manfred and Joe Tacopina, I'm pretty sure this entire circus will end up being settled like this: