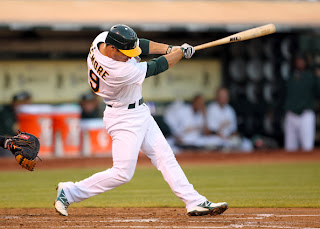 When the Scott Sizemore signing was announced yesterday, I was a little quick to condemn it as an organizational depth move and nothing more.  We are talking about a guy who's played in just 2 games and had only 6 plate appearances since the end of the 2011 season, and while ACL injuries aren't quite as devastating to baseball players as they are to basketball or football players, 2 of them in a row to the same knee isn't exactly a recipe for MLB success.

The more I let the idea of Sizemore marinate in my subconscious while watching the football games yesterday, the more I started to feel like I rushed to judgment on the guy.  Now that I've checked his numbers, I'm starting to feel like he may have something to offer the Yankees after all. 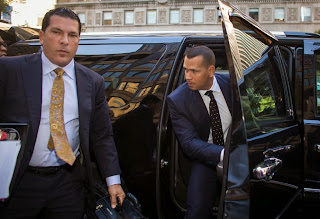 At long last, the arbitrator decision in the Alex Rodriguez Biogenesis suspension case was handed down this past weekend.  As many expected, the decision was not in Alex's favor.  As I expertly predicted (for once), the decision ended up being 162 games instead of MLB's original 211.  The immediate reaction from writers, bloggers, and fans alike was plentiful and spread across a wide range of feelings, and that tidal wave of activity only increased in size after last night's "60 Minutes" piece on the topic aired.  I tried to keep my thoughts on the decision to a minimum while the finer details and reactions from all parties involved came out, and I think I've had enough time to read everything, mull the whole situation over in my head, and comment intelligently on the matter.  My take on everything after the jump.

It's not the flashy signing of a Grant Balfour that I'm sure many of us are still hoping for, but the Yankees did add a potentially intriguing arm to their bullpen cache over the weekend when they inked reliever Robert Coello to a MiL deal.

For those unfamiliar, Coello is a 29-year-old right-hander with 29.0 innings of Major League experience spread across 3 years and 3 different teams.  He made his biggest mark this past season when he pitched to a 3.71/2.52 ERA/FIP split in 17.0 IP with the Angels, striking out 23 and walking 8.  He was moving up the hierarchy of the Anaheim bullpen before shoulder problems shut him down.

What makes Coello a potential diamond in the rough is the forkball he throws.  It's shown in the video above and it's absolutely flthy.  When he's commanding it and mixing it with his low-90s fastball, he's proven to be a very good swing-and-miss pitcher at both the Minor and Major League levels.  If his shoulder is OK, he could surprise some people in camp and sneak into the bullpen at some point this year.

If you missed it, "60 Minutes" devoted over half their show last night to the Alex Rodriguez suspension, trotting out Anthony Bosch, Bud Selig, Rob Manfred, and Joe Tacopina to give their versions of everything that's gone down in this case and basically pile on A-Rod a little more.  The reactions to the piece were quick and emotional, with the MLBPA issuing this statement:

“It is unfortunate that Major League Baseball apparently lacks faith in the integrity and finality of the arbitrator’s decision and our Joint Drug Agreement, such that it could not resist the temptation to publicly pile-on against Alex Rodriguez. It is equally troubling that the MLB-appointed Panel Arbitrator will himself be appearing in the “60 Minutes” segment, and that Tony Bosch, MLB’s principal witness, is appearing on the program with MLB’s blessing."

MLB, always quick to cover its own ass, followed up with a statement of its own:

“We have notified the Major League Baseball Players Association on numerous occasions that we intended to respond to all of the attacks on the integrity of our Joint Drug Program. Those attacks continued yet again yesterday with Mr. Rodriguez’s statement. Out of respect to the grievance process and at the request of the MLBPA, we waited until a decision was rendered to make our response."

There's more to each statement but the general theme is pretty clear.  The players union is pissed that MLB decided to take this public and allow statements to be made that make them all look bad after they stayed out of the way of the A-Rod arbitration hearing and said they respected the process.  MLB is pissed that the players made their frustrations public and now everything is public, everybody is pissed, and this circus is no closer to ending than it was when the story first broke last year.

This whole thing is so tiresome and stupid.  I want to say I really can't wait for pitchers and catchers to report to push this to the back burner, but with A-Rod planning to attend Yankee ST I don't think that's going to happen.