This Was A Joke, Right? 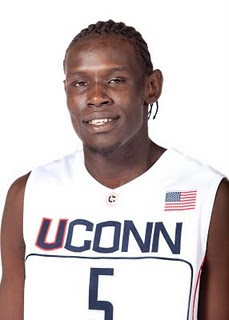 Who the hell was that gawky dude wearing Ater Majok's uniform today?  Husky fans have been waiting for half an eternity to see this guy play and that was what we got today?  1 point and 3 rebounds in 16 minutes of underwhelming, uninspired, seemingly clueless play?  Seriously, did Calhoun switch Majok's number with Mandeldove's in some sort of bizarre strategic move?

All I saw out there today was a scared little boy who had no clue what the fuck he was doing.  He was completely helpless and lost out there, and that was just against UCF.  What's it going to be like when he has to start banging bodies in the Big East?  Is it too late to send him back to Sudan?

Oh well, at least the Huskies still have Gavin.
Posted by Unknown at 5:32 PM No comments: