Dave Eiland Is A Miracle Worker 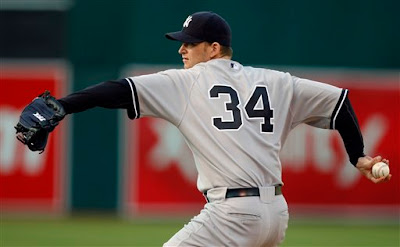 (Photo courtesy of The AP)
2 A.J. starts since he returned to the team and 2 very good performances.  A.J. is back on the center of the rubber, he's not flying open, and he's back to locating his fastball and curve where he should be, and it's all thanks to Dave Eiland.

Or maybe it's thanks to Felix Hernandez.  According to this post in LoHud, A.J. got the brilliant idea to use his changeup more after watching Felix devastate the Yankees with it the last time he faced them.  So much for A.J. getting back to doing what he wants to do, but whatever.  Just like Phil Hughes, I thought it was strange that he spent so much time working on it in Spring Training and getting rave reviews from everybody on the pitch, and then never using it once the regular season started.

Personally I could care less what A.J. throws as long as the pitches aren't coming right over the heart of the plate, but if he can continue to work his changeup in effectively like he did last night, it will make his fastball and curve that much more dangerous.  I'll let everybody else worry about his low strikeout totals.  Pitching to contact and locating the pitches to get the kind of contact you want is just as effective in getting outs and with the defense behind him, A.J. can and should be confident that his team behind him will eat that contact up like they did last night.
Posted by Unknown at 8:21 AM No comments: