It's Prospect Week over at TYA, and that means a whole shit ton of prospecty goodness.  It kicked off today with the release of the combined TYA Top 20, which I am already getting beaten up over for my selections in the comments section, and will continue over the course of this week with daily staff roundtables, prospect-related posts, and whatever else we decide to cook up.

Do yourself a favor and make sure to check it out.
Posted by Unknown at 5:26 PM No comments:

How Does Nobody Claim Chris Dickerson? 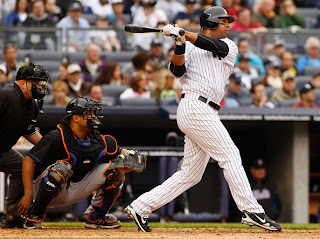 (Courtesy of Getty Images)
That's a serious question.  The Yankees had to put Chris Dickerson on waivers yesterday to make room on the 40-man roster, and by some stroke of dumb luck he managed to clear waivers and was outrighted to Triple-A.  Apparently every other GM in baseball was in the bathroom or out to lunch with their families or stuck in the movie theater with their wives watching "The Artist" while this move was happening.  Now instead of being in camp in a different uniform participating in what would likely be a more fair competition for the 4th OF bench role, Dickerson will be safely stashed away in Triple-A for the Yankees should they run into problems with their current group.

I just can't, for the live of me, figure out why every other team out there would willingly pass on a guy like C-Dick.  Is every team in Major League Baseball that set in the outfield?  I know for a fact that teams like the Mets and Astros are absolute shit in the outfield and could use Dickerson, if for nothing more than another warm body to compete and push other players to earn their spot.  Even though he's 29, turning 30 in April, and has only 582 Major League plate appearances to his name, Dickerson brings a lot to the table.

For starters, the guy is a physical monster.  He's listed at 6'3", 230 on the Yankees' website but he looks about 6'5", 245 on TV.  He's got great speed and athleticism, allowing him to play all three outfield positions if needed, and also making him a very good baserunner and base stealing threat.  At the plate, C-Dick is far from an automatic out.  He owns a career .266/.351/.399 slash line in his 582 PA (.338 wOBA) along with a respectable 11.0% BB rate, and as a lefty swinger he has produced a solid line against right-handed pitching (.270/.355/.415, .341 wOBA).  Sure he strikes out a bit more than you'd like to see, and he doesn't generate a whole lot of power for a guy his size (.133 ISO), but the positives far outweigh the negatives with Dickerson and he's an almost picture perfect candidate for a 4th OF role.  Now the Yankees have him as their 6th.

Between the defense, baserunning skills, and ability to hit righties well, Dickerson has accumulated 3.5 fWAR in what equates to almost one full season's worth of plate appearances in his career.  That's not too shabby if you ask me.  I've praised Dickerson before for his contributions to the Yankees and I'm glad they managed to keep him around as insurance this year.  I'm still flabbergasted that not one other team thought they could use him, though.  It's mind-bottling.
Posted by Unknown at 8:30 AM 3 comments: