Major League Baseball released the 2014 schedules for all teams today, without game times of course.  There's plenty to discuss with respect to the Yankee schedule for next year, but with the focus still being on their dwindling playoff chances in 2013, let's just hit the highlights for now.

- Season opens on the road on April 1st, 2014 against the Houston Astros.  It ends on September 28th on the road against Boston.

- Home opener is April 7th against the Orioles.

- Subway Series will be May 12th-15th with the first 2 games at The Stadium and the last 2 at Citi Field.

- Interleague play will take place against the NL Central, including 2 home series against Pittsburgh and Cincinnati, 2 road series against St. Louis and Milwaukee (!!!), and a 4-game split with the Cubs.

- As is usually the case, the start and end to the regular season will be primarily AL East opponents- 17 of the first 22 games and 26 of the final 29.
Posted by Unknown at 3:37 PM No comments:

C-Grand Slump Comes At The Worst Time (For Everybody) 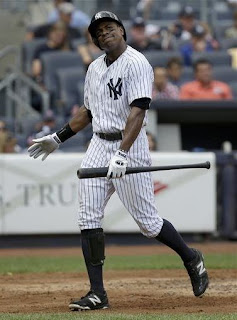 As bad as the weekend series against Boston went for the Yankees, there's something to be said for them putting up 29 runs in the 4 games.  It wasn't for lack of offense that they lost 3 of the 4 games, and guys like Robbie Cano, Brett Gardner, Alfonso Soriano, Lyle Overbay, and even Ichiro all had various levels of productive weekends at the dish.

One guy who didn't was Curtis Granderson, who's seen his production slow since first coming off the DL last month.  Joe sat him for Friday night's game and didn't even use him in a late pinch hitting role, and in the 3 games he did play C-Grand went 1-13 at the plate with a double and 5 strikeouts. 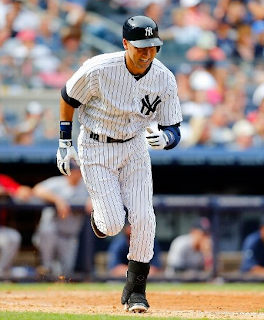 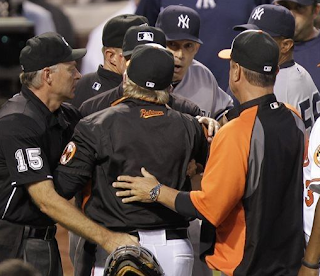 It was a strange start to say the last to the tough 11-game stretch that's going to make or break the Yankees' slim playoff chances.  They ended up going 1-3 against Boston in a series that could have easily seen them go 3-1 or lose all 4 games.  They were battered and bruised in the bullpen and working with an even shorter crew of useful arms after Joe used Mo for 2 innings on Sunday, and with the ever-shaky CC Sabathia on the mound that wasn't a good backup plan against a dangerous Baltimore offense.  Joe stacked his best bats in the top 5 spots of the batting order in hopes of getting some early runs against Chris Tillman.  It didn't work, as Tillman was on top of his game and the Yanks lost their 4th in 5 games.

- Lotta fireworks in the 1st inning.  Alex Rodriguez hit a solo HR in the first half, Nick Markakis hit a leadoff double to set up the tying run in the second half, and when the inning was over Joe and Buck Showalter got into a shouting match at home plate over sign stealing.  Gotta love that added Wild Card pressure.

- After the 1st inning it was much smoother sailing for CC.  He gave up a few loud outs through 3 more scoreless innings but also got a few big strikeouts.

- Those loud outs turned into hits and runs in the bottom of the 5th.  Another leadoff double by J.J. Hardy got things started, and a couple of 2-out hits on badly located fastballs made it 3-1 Baltimore.

- The heavier workload in the 5th seemed to take its toll on CC.  He gave up 2 hits before striking out the side in the 6th and gave up another run in the 7th after his own throwing error before escaping with a K of Adam Jones.  If the bullpen was deeper, he probably would have been done after 6.

- A-Rod's homer in the 1st was all the lineup could muster against Tillman.  He mixed his fastball and changeup beautifully and threw enough good curveballs to keep the Yankee hitters off balance.  He gave up only 2 more hits through the 7th.

- Lyle Overbay finally broke through with a solo shot in the top of the 8th to chase Tillman from the game, but Buck had the option of going to his bullpen aces and he did that to shut it down and save the win.