No surprise there.  We knew this was coming the minute he got tossed last night.  The suspension starts tonight if Pineda chooses not to appeal, and I can't imagine why he would, and he will be eligible to return on May 5th.  He'll miss 2 starts, but because of the scheduled off-day on Monday the Yanks will only need to fill his rotation spot once.  I imagine David Phelps will be the leading candidate to make that spot start.  According to Dan Barbarisi, Shane Greene and Bruce Billings are with the team in Boston.  No word yet on roster moves to add them to the bullpen.

** UPDATE 4:40 PM- Greene and Billings have officially been called up, Dean Anna and Preston Claiborne have been sent down, and Ivan Nova was moved to the 60-day DL.  There's your daily dose of roster moves. **

Posted by Unknown at 2:37 PM No comments: 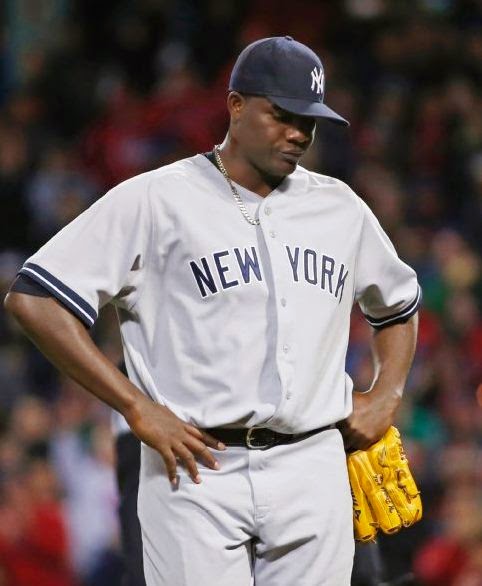 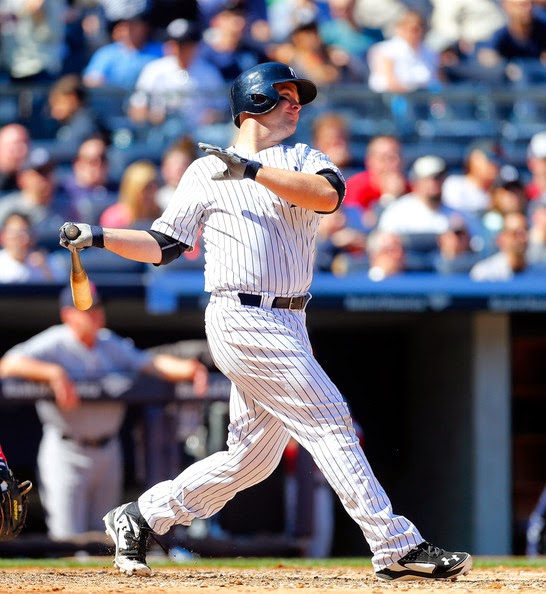 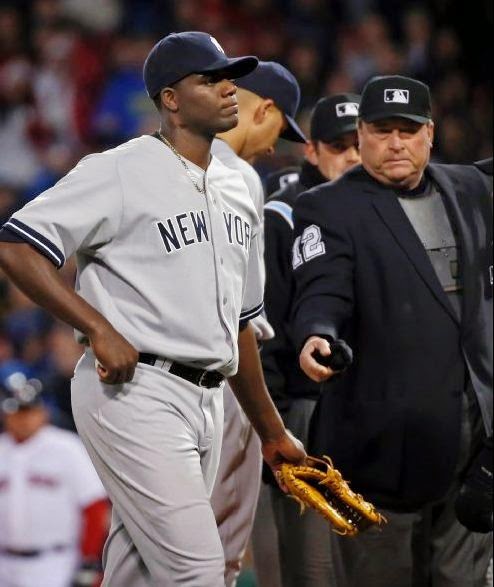 I don't give a shit what month it is or how many games are left, I really wanted a win last night.  I would have loved nothing more than for Michael Pineda to come out and put on a repeat performance of what Tanaka did to the Red Sox on Tuesday and for the lineup to slap around John Lackey's fat idiot face for 5 innings like they did to Lester.  I despise John Lackey.  Maybe more than I despise Ortiz nowadays.  Another beatdown victory against that shitheel would have been supreme.  Instead we got bad cheating, an early exit for Big Mike, and one of those games you want to forget as soon as it ends.

- Pineda had command issues early, possibly due to the cold weather.  He labored through a 2-run 1st inning on 30 pitches, struggling to locate his fastball or slider with any kind of consistency.

- He returned to the hill for the bottom of the 2nd with a noticeable pine tar mark on his neck, comically noticeable.  With 2 outs and 2 strikes, John Farrell asked the home plate ump to check him and check him he did.  Gerry Davis saw it, felt it, decided it was enough to warrant an ejection, and tossed Pineda on the spot.

- Lackey didn't have any command problems and he breezed through 4 scoreless innings with 7 strikeouts.  He was pounding the strike zone with fastballs and keeping the Yankee lineup off balance.  They didn't do themselves any favors by swinging early and keeping his pitch count down.

- The Yanks squandered runners at second and third with 1 out in the 5th, but finally got on the board in the 6th when Carlos Beltran led off with a double and advanced home on 2 outs.  It was that kind of night.

- Give a call to the bullpen for keeping them in it, but this game was over when David Phelps gave up 2 runs in the 3rd to make it 4-0 Boston.  The lineup was overmatched by Lackey and never did anything with the chances they did create and the defense was horrific.