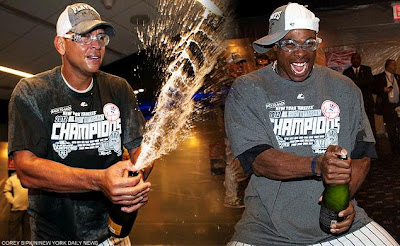 Pennants and championships aren't won in December, that much we know.  But the collection of moves that have been made (and not made) so far begs the question, are the Yankees still considered the king of the hill and the top of the heap in the AL East?  Should they be?
Read more »
Posted by Unknown at 1:07 PM No comments:

Has It Really Come To This?

This past weekend the Yankees found out their 2012 luxury tax fate, and they were reportedly in for $18.9 million or as I like to call it, more money than I'll ever come close to seeing in my life.  It was a bump up from their 2011 luxury tax and established a pretty good benchmark for how much work the Yankees still have to do to get under that luxury tax threshold in 2014 as well as how much they've already done over the last 10 years to rack up almost a quarter billion in luxury tax penalties.

Yesterday the AP released a story that damn near everybody in blogosphere hopped on immediately. Apparently somebody forgot to carry a 3 somewhere, because it turns out the Yankees actually owed $19.3 million in luxury tax, OOOOOOOOOOHHHHH!!!!!  That's right, Yankee fans.  The old Evil Empire got dinged for another $393,648 and everybody's talking about it like it's actual news.  Ummm, what planet am I on??
Read more »
Posted by Unknown at 7:40 AM No comments: