I don't know about you guys (and gals), but I worked too damn hard this week.  Somehow, someway, I still managed to find enough time to gather up the best of the week that was around the Yankosphere.  The things I do for you.  If you're shutting down mentally for the day like I am, hopefully this is enough to kill the rest of the time you have to spend in the office.

- On Tuesday, William Tasker of IIATMS compared Francisco Cervelli and Austin Romine as backup catcher options.  As a guy who's no fan of Cervelli and still not 100% sold on Russell Martin staying healthy for a whole season, I can totally get behind Romine getting the spot to get more reps.

- Also on Tuesday, the team over at Bleeding Yankee Blue interviewed Nick Swisher.  I feel like I'm definitely the last blogger out there who hasn't actually talked to someone from the Yankee organization.

- On Wednesday, BryanV21 of The Greedy Pinstripes took his turn breaking down the hypothetical 2014 payroll to see if there's room for Cole Hamels.  As the guy who wrote the "dream rotation" post that got hijacked by the commenters and turned into a discussion about what hitters to go after, it's good to know I'm not the only one out there who wants Hamels.

- Joe Pawlikowski of RAB traced the long and mostly mediocre history of Yankee catchers between the Thurman Munson and Jorge Posada eras.  Definitely a cool read to see some of the names that get brought up there.  They're pretty easy to forget about when you've got Berra, Dickey, Howard, and the aforementioned Munson and Posada getting all the shine.

- On Thursday, el duque of It Is High!... made an impassioned, and very logical, argument for why the Yankees should hang on to A.J. and not use his salary relief as a reason for not signing a DH target (Damon).  I'm always the first in line to punk A.J., but I found myself nodding in agreement with everything ED had to say here.

- Frank Campagnola of Pinstripe Alley looked into Russell Branyan's BABIP to see if 2011 was just a bad luck speed bump on Branyan's otherwise stellar track record of hitting right-handed pitching or the start of something more.  Here's hoping it was just bad luck because I'd love to see him launch a few homers in Yankee Stadium wearing pinstripes for a change.

- William Juliano of The Captain's Blog crunched the numbers on Keith Law's Top 100 Prospects, and took the time to point out that if you count Montero and Arodys Vizcaino, there's a lot of big time talent on this list that was drafted, signed, and/or developed by the Yankees.

- On the heels of his NoMaas interview last week, this week Dante Bichette Jr. talked to Delia E. of Yankees Fans Unite.  Yep, I'm definitely the only one not interviewing people.  Balls.  Good job, Delia, and nice job getting Dante to shout out Mariel Checo as the GCL teammate that impressed him the most last season.

- We'll finish this up with a trio from my boys at TYA.  First up, Mike Jaggers-Radolf tackled the A-Rod health subject again on Monday, reminding us that when he is healthy he can still produce at a well above-average clip.

- On Wednesday, Alex Geshwind talked about Ivan Nova's strikeout rates as a predictor of his future ceiling while also taking the time to point out that Nova can still be successful and still be a valuable piece to the rotation even if his K/9 never rises above the 6s.

- Also on Wednesday, Michael Eder looked at the Yankees' history of scouting and developing great relief pitching over the past 20 years.  It started with Mo and it's continued right through today.  Say what you want about their ability to develop starters, but there's no denying that the Yankees have an eye and a method for relief talent.

We can't leave without a jam of the week, and after three weeks of asking I FINALLY got a reader request.  Courtesy of loyal AB4AR fan Jessica E., who was nice enough to offer her request on the AB4AR Facebook page, here's The Cure with "Friday, I'm in Love."  Enjoy the weekend, everybody.

Pirates A Match For A.J.?

In the Yankees' continued effort to move A.J. Burnett, a serious potential trade partner might be materializing in the Pittsburgh Pirates.  It started with some Buster Olney reports on Twitter yesterday, and it's continued today with Jon Heyman picking up the story.

The talks right now center around the Pirates' need for a pitcher who can eat innings and the Yankees' desire to get lefty-hitting Garrett Jones back in the deal.  Jones, 30, is a .254/.323/.450 career hitter (.334 wOBA), and is even better against right-handed pitching, posting a .275/.354/.483 slash and a .360 wOBA in over 1,000 career AB against righties.  He has legit power (.196 career ISO) and a decent BB rate, and would be an ideal candidate to fill the lefty DH role in the Yankees lineup, but so far the Pirates have shown no interest in parting with Jones. 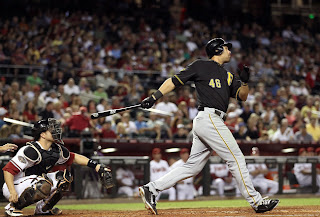 (That swing would look nice in pinstripes.  Courtesy of Getty Images)
With the Yankees continuing to look for ways to add two bats despite signing Russell Branyan, this trade makes a lot of sense for them.  Jones would give them a legit lefty threat from the DH spot and presumably the Yankees would free up that little bit of money they're looking to use to spend on a Chavez or Ibanez type, if they would even still be targets after acquiring Jones.  But if the Pirates take a hard stance on giving up Jones, the Yankees may have to sweeten the deal.  Whether that means agreeing to pick up more than the $25-28 million they're reportedly willing to eat or adding another player is unknown, but for a hitter of Jones' caliber that might be worth it.  He would be a better option than any of the free agents the Yanks are currently connected to, including Branyan.  Stay tuned...
Posted by Unknown at 10:47 AM No comments: 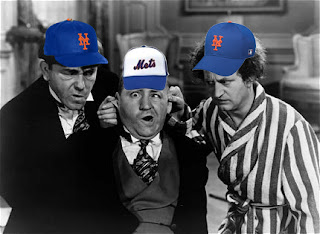 If you're a regular reader of AB4AR, you know by now that the Mets are one of my favorite punching bags.  I like to take shots at them and break balls about how crappy they've been, and generally it's all meant to be funny and joking.  But this story from earlier in the week by Howard Megdal of The Journal News and the LoHud Mets Blog, describing how he was denied media credentials by the Mets, is the epitome of classlessness on the part of the Wilpons and the latest, and strongest, example of just how awful that organization is.

Basically what it boiled down to was Megdal writing a book about the Wilpons and all the shit they were in after the Madoff scandal that was published in December.  The Wilpons weren't fans of what Megdal had to say in his book, despite the fact that he reached out to the organization multiple times during the writing process and spoke to members of the organization as part of his reporting for the book, and so they decided to stiff him on his clubhouse credentials for the 2012 season.  This message was passed along by Jay Horowitz, who when asked by Howard why he wasn't going to be issued credentials, said that the Mets simply, "don't like his reporting."

Now I don't know Howard personally, and I only know about this story because it was brought to my attention by one of my fellow TYA writers in an email yesterday.  But from everything I can gather from people who do know him and are familiar with his work, he is a good dude, a diehard Mets fan, and a damn good reporter.  To have his credentials taken away by the Wilpons because of the book, which has never had its content questioned and has actually been supported a few times in other stories by the likes of the New York Times and ESPN, is a petty, cowardly, childish, unprofessional act that shows the type of people the Wilpons are and reinforces all the negative talk that has surrounded their time as the owners of the Mets.  It's also downright un-American.  It's Nazi-like.  You don't like somebody calling you out for the shitty job you're doing?  THEN DO A BETTER JOB!!!  Don't take the coward's way out and deny the guy the ability to do his.

Howard Megdal is a reporter for a legitimate news outlet, so he has to bite his tongue on this whole issue and stick to the PC comments he made on the matter.  I write a dinky little blog, so I don't have that problem.  On behalf of Howard, I'd just like to say "fuck you" to Fred and Jeff Wilpon.  You're slimy, dirty, pathetic, creepy, lying crooks who have managed to turn what was one of the better teams in the National League into an absolute joke of an organization.  And in the process of doing so, you've spit in the eyes of everybody who cares about your team- the fans, the media, the players, the coaches, the team alumni, everybody.  Howard Megdal's only crime was being good at his job and reporting the truth, two things that you know nothing about and never will.  If it weren't for you relationship with Bud Selig, you would have been out on your asses a long time ago, and I can only hope that things continue to spiral downward for you to the point that you are forced out, because that's the only chance the Mets organization has to crawl out of the shitheap you've dumped it in.

I don't say this often, but today I can say with 100% honesty and no sarcasm that I feel sorry for all you Mets fans out there.  And I feel sorry for Howard Megdal and the bullshit hand he's been dealt by those sleazeballs.  You all deserve better.
Posted by Unknown at 7:50 AM No comments: