Everybody is in full-on catharsis mode today after another frustrating 1-run loss chock full of chances to turn it into a W.  That loss was the 8th 1-run loss in the Yankees' recent piss-poor 6-12 stretch dating back to that fateful 4-game series out in Oakland, and has cut their division lead down to 4.5 games (with a still respectable 5-game lead in the loss column).  Matt Imbrogno of TYA is spilling his frustrated guts, as is Mike Axisa of RAB.  One particular part of Mike's collection of observations stuck out to me, because it was something that popped into my head immediately last night when I saw that Phil Hughes had given up 2 runs in the bottom of the 4th after the offense had staked him to a 2-run lead in the top half:

"You know what else is annoying? The Yankees’ pitchers seem to give back every run the offense gives them in the span of an inning these days. Phil Hughes did it last night, Ivan Nova did it the night before, Nova did it again in spectacular fashion in his last start before that … the whole 'shutdown innings' thing seems to have gone out the window. This has become one unwelcome habit. Maintaining a lead for more than one inning should not feel like a miracle."

This thought has crept into my mind on more than on occasion over the last couple weeks, and last night was the tipping point.  I decided to check into just how often the Yankee pitchers have been giving runs back in shutdown innings during this 6-12 stretch to see how often it's been happening.
Read more »
Posted by Unknown at 10:30 AM No comments: 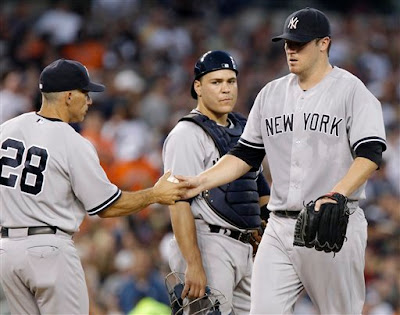 - Chavez singled, Raul Ibanez worked a hard-fought 2-out walk, Ichiro singled home a run, and Russell Martin doubled home Ibanez to put runners at 2nd and 3rd for Curtis Granderson.  C-Grand couldn't come through to complete the comeback, though, popping out to first to end it.  Ballgame over, Yankees lose.
Read more »
Posted by Unknown at 7:04 AM No comments: