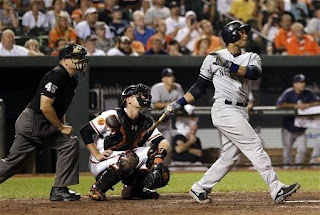 Robinson Cano has finished in the top 6 of the American League MVP voting in each of the last 3 seasons.  With a high of 3rd in 2010 and a low of 6th the next year, Cano has never been a true leading contender for MVP despite consistently being the best player at a premium position on a perennial playoff team.  Part of this is due to the ever-present MSM bias against the Yankees when it comes to awards and part of it is because there were always clear cut better candidates.  Overall, I'd say Cano has finished about where he should each year, with the general ranking maybe coming in a tick low.

Which brings us to 2013.  Cano is once again not the leading candidate and not seriously in the discussion as the best or most valuable player in the league, but he's right in the mix.  He's also not part of the traditional Yankee regular season machine that steamrolls everybody.  He's been the linchpin holding a borderline terrible baseball team together, a team that is somehow still mathematically in the playoff race with 11 games to go despite a -17 run differential.  If ever there was a time where his contributions were more valuable to his team, it's this season.  That being what it is, and his stats being what they are, where does Robbie fit into the AL MVP race?

Guys the Yankees decided they didn't want/need back this season:

Guys the Yankees chose as replacements for the departed: 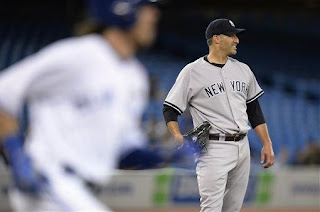 (Only mistake he made.  Courtesy of the AP)

Another big game, another night with Andy Pettitte on the mound.  As bad as their rotation is as a whole right now, the Yankees could at least take solace in the fact that they had their best out on the mound in a crucial game last night.  Andy's been the rock of the rotation for the better part of the last month, and he was at his best again last night against a Blue Jays team that the Bombers have owned this season.  But as has been the case many times before this season, Andy would have had to be better than perfect to get a win with the lack of offensive support he got.  It's tough to be perfect when you're 41, and it's tough to win games when you don't score runs.  Do the math.

- The Yanks had no problem creating scoring chances with 2 outs against R.A. Dickey.  They loaded the bases in the top of the 1st and put 2 men on in the 2nd.  They just couldn't come through with the 1 hit to score a run and went through the first 4 innings scoreless.

- Andy matched Dickey 0 for 0 through 3 innings, working around a 1-out jam with runners on second and third in the 3rd.  He hung a slider to Colby Rasmus in the 4th that Rasmus jacked for a solo home run and the Jays were on the board.

- Those early missed opportunities loomed large heading into the final innings, as the Yankee lineup didn't muster a single hit off Dickey after the 4th .  11 consecutive retired before he gave way to the bullpen after 7 strong.

- Joe rode Andy into the 7th, and with 2 outs and Pettitte at 110 pitches he made the call to go righty-righty against Rajai Davis.  He went to Shawn Kelley, who promptly gave up a crushing solo HR to double the lead and waste another great Pettitte start.  Right decision, bad result.  That's baseball sometimes.

- A Lyle Overbay single in the 9th broke the hitless streak, but it didn't lead to anything.  The bats have gone ice cold just when the Yanks needed them the most, and the playoff hopes are on life support.