Allow Me A Quick Minute To Gloat

"Oh, the Yankees are in trouble this year.  The Yankees have so many questions.  They're rotation is no good after CC.  Andy Pettitte is hurt and looked terrible in his last start.  What are they doing with A.J. Burnett?  Phil Hughes threw too many innings.  Mariano was bad in September so he's clearly old and breaking down.  Derek Jeter can't hit anymore.  Who is going to play catcher?  A-Rod can't be as good as he was last year in the postseason.  Is Joe Girardi going to Chicago?  What about Joba?  Can the bullpen hold up in front of Mo?  They don't have homefield advantage for this series.  They played terrible in September.  They didn't go for the division.  Can they turn it on again?"  Blah, blah, blah, BLAH, BLAH, FUCKING BLAHHHHH!!!!!!

Suck it, ESPN.  Suck it, Sports Illustrated and SI.com.  Suck it, mainstream media.  Suck it, doubters from the Post, Daily News, NY Times, and every other NY-based literary outlet that spent more time pointing out the potential questions and potential problems instead of recognizing the year of success from those who were on the 25-man roster that perfectly predicted the series outcome.

Now back to your regularly scheduled postseason coverage...
Posted by Unknown at 4:13 PM No comments:

Wrapping Up The ALDS 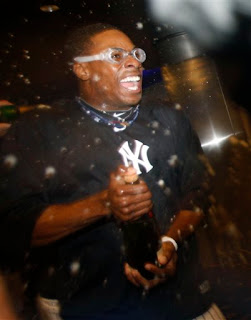 (Photo of C-Grand's well-earned champagne bath courtesy of The AP)
Now that the dust has settled and the champagne has dried, let's take a look back at the 3 keys to the series and see how we did, shall we?

2) Production from the Leadoff Spot

So as far as the key factors, the Yankees won 2 of those 3 battles, having a decided advantage in the RISP category, which certainly was a major factor in their sweep.  If you look at the series in even broader strokes, the Yankees' advantage becomes even clearer.

Team Batting for the series:

The Yankees flat out out-hit the Twins in this series, as their deep and balanced lineup shown through.  Every Yankee player had at least 2 hits, and only Derek Jeter didn't score a run.  The Yankees also stole 4 bases to the Twins' 0.  They hit for more average, they hit for more power, they ran the bases better, and they hit better in key situations.

The trio of Teix, Swish, and Robbie Cano were particularly effective, going a combined 12-37 (.324) with 8 runs scored, 6 XBH, and 5 RBIs, erasing the memories of their collective 2009 postseason struggles.

On the other side, the Twins' big 4 of Mauer, Thome, Cuddyer, and Kubel went a combined 6-41 (.146) with 3 runs scored, 2 XBH (both by Cuddyer in Game 1), and 2 RBIs (also both by Cuddyer).  The heart of the Twins' order barely had a heartbeat.  Only Delmon Young hit will in the series and because everybody in front of and behind him hit so poorly, he only had 1 run and 0 RBIs to show for it.

Team Pitching for the series:

The Yankee starters were far superior to those of Minnesota, doing a better job of missing bats and limiting damage.  The discrepancy between their collective performances and stuff becomes even greater when you consider that 3 of the Yankees' 5 walks allowed were by CC in Game 1 and 7 of Minnesota's 11 strikeouts were by Liriano in Game 1.

The Yankee 'pen was also better than Minnesota, despite similar numbers in limited innings.  The Yankee 'pen didn't allow a single inherited runner to score, whereas Minnesota allowed a few key runs to come across.  And 3 of the 7 hits allowed by the Yankees were by Kerry Wood in Game 3.  Other than that, everybody was lights out, a sign of better stuff and making better pitches when the moment called for it.

At the end of the day, it isn't difficult or surprising to see why the Yankees won.  They hit better and they pitched better because they had the better players.  The Yankees executed their gameplans much better than Minnesota did and they had more to show for it.  Their starters gave them length and their bullpen shut the door on the Twins on the few chances they did create for themselves, and in between the Yankee batters got more hits, more extra-base hits, and more hits in big moments.  All that adds up to a pretty easily-explainable series sweep.  Now they get to sit back for another 2 days and watch Tampa and Texas duke it out for the other ALCS slot while the Twins go home and make tee times.
Posted by Unknown at 10:19 AM No comments: