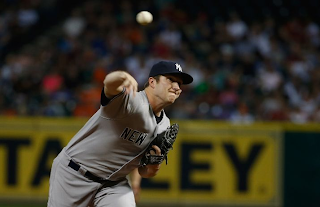 Normally the Yankees ending their regular season in the AL basement that is Houston would be a borderline insult.  This year, it's strangely fitting.  The Yankees are out of the postseason race, Mo had has day and night in the sun during the final homestand, there's just nothing left to care about this season.  Joe finally made the call to go to the younglings for this series and there were starting pitching holes to fill against the Astros.  Adam Warren got the spot start last night, in an early audition for the rotation competition next year.  After an up and down year as the primary long reliever, something positive to end his season would have been a good thing.

- Something positive was exactly what he got.  Warren tossed 5 scoreless innings on less than 70 pitches, surprising considering how little he's pitched lately.  He gave up just 2 hits and 1 walk, and retired the final 8 batters he faced.

- The offense gave him all the support they could muster in the top of the 4th when a Robinson Cano single and Alfonso Soriano walk set the table with 1 out.  Mark Reynolds singled a run in to get the Yankees on the board and David Adams doubled to bring in 2 more and make it 3-0 Yanks.

- David Phelps relieved Warren in the 6th and pitched into the 7th.  With 2 outs and 2 on, Joe decided to take him out and go to Joba Chamberlain.  In typical Joba fashion, Chamberlain was a human dumpster fire, giving up a 2-run double on the first pitch he threw, a single on the next, and walking a batter before getting out of the inning.

- Preston Claiborne worked an effective 8th, highlighted by a J.R. Murphy-to-Adams caught stealing to end the inning, and David Robertson got a save opportunity in the 9th that he converted in 1-2-3 fashion.