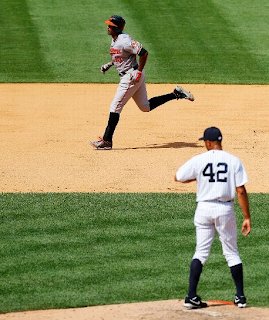 The shoe was on the completely different foot from where it was 1 Sunday ago for the Yankees this afternoon.  They were in position to sweep the Baltimore Orioles out of town and put a little bit of distance between them in the AL Wild Card race, as well as keep their new season-high 6-game winning streak going.  They had a returning Hiroki Kuroda on the mound after he missed a few days due to a hip flexor strain.  He came through his last bullpen without issue and the call was made to put him right back to work.  How did he fare on a hot day against Baltimore's Jason Hammel?  Not too shabby actually.

- Although they didn't have much to show for it (Eduardo Nunez sac fly), the Yanks definitely made Hammel work.  They fouled off a ton of pitches and made him throw 53 pitches just to get through the first 2 innings.

- Kuroda didn't look bothered by the hip and got off to an excellent start.  He located well down in the zone, was constantly working from ahead in the count, and got around a couple of doubles with no issue to keep the O's scoreless through 4.

- Hammel was out after 5 innings, but with the Yanks only pushing the 1 run across they still needed to tack on against the bullpen.  They didn't do it over the next 3 innings and it came back to bite them later.

- Kuroda, working much more efficiently than Hammel, stayed strong and scoreless through 7.  As he usually does when he's feeling good, he started working his splitter more the second and third time through the order.

- He didn't appear tired after the 7th, but Joe played it safe with Kuroda at 88 pitches and decided to go to his overworked bullpen horses again.  D-Rob did the job in the 8th, but Mo didn't have a lot of movement on his cutter in the 9th.  After just missing giving up a HR to Nick Markakis, he did to Adam Jones on a ball down the middle to make it 2-1 Baltimore.

Cano & Rivera The Unsurprising (And Only Deserving) Yankee All Star Selections 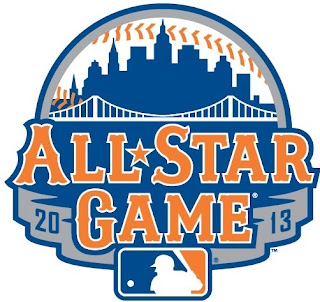 The All Star Game rosters were announced last night and the 2 Yankee representatives were Robinson Cano and Mariano Rivera.  2 reps is a low number for the Yankees, but in this season of offensive decline in their everyday lineup it was the right call.

There are now a trio of notable MiL rehab assignments taking place in Yankeeland with Derek Jeter starting his last night for Triple-A SWB.  All 3 guys were in action yesterday at their respective levels.  Here's how they did:

Jeter- Went 0-2 with a groundout and lineout and played 5 innings at shortstop, getting just one chance to field a groundball and doing it successfully.  He'll DH in today's game and then be re-evaluated Monday to determine next steps.

Michael Pineda- Started the game for Triple-A SWB last night and had a much better performance than his previous outing.  Pineda pitched 5 innings and allowed 2 ER on 4 H and 2 BB while striking out 7.  He threw  78 pitches in the outing.  His 30-day rehab window expires tomorrow and with his pitch count that low I expect he'll be assigned to Triple-A for another few weeks to fully stretch out.

Alex Rodriguez- A-Rod went 1-2 w/ an HBP and a R scored for High-A Tampa last night and fielded all balls hit to him cleanly in 6 innings at third base.  No report on what the plan is for him today, but he needs ABs so maybe a DH day.