A message to all the loyal AB4AR readers out there.  I recently accepted an invitation to join the team over at The Yankee Analysts, and starting this coming Tuesday you can check my stuff out over there a couple times a week.  If you're somehow a rabid follower of AB4AR and NOT familiar with TYA, I suggest you spend the next couple of days familiarizing yourself with what Larry, Moshe, and the boys over there are doing because I assure you, they do it far better than I do.

Please know that this will in no way affect what I do over here at AB4AR.  I'm not jumping ship so much as I'm forming an alliance with a much bigger, shinier, nicer, better ship.  I'll still be here each and every day churning out the same brand of sarcasm-fueled commentary and analysis that you're accustomed to.  But if you're interested in seeing my stuff in a more professional setting (and you really should be), be sure to head over and check me out at TYA starting on Tuesday.
Posted by Unknown at 4:20 PM No comments:

A Preemptive Strike On The Albert Pujols Situation 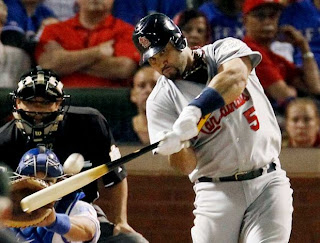 (Don't even think about it, Yankee fans.  Courtesy of The AP)﻿
Last night's performance by Albert Pujols in Game 3 of the World Series was one for the record books.  It could very well have been the greatest individual offensive performance in World Series history: 5-6, 3 HR, 6 RBI, 14 TB.  Those numbers are more than Nick Swisher could hope to put up in an entire postseason, let alone one game (zing!), and it was the kind of performance that could launch a million fantasies in Yankee fans' heads.  Luckily for those Yankee fans, I'm here to give you a dose of reality.

Stop it.  Stop thinking about the Yankees signing Albert Pujols.  Just stop.  It's not going to happen, it never was going to happen, it never will happen.  So please do yourself a favor and spend the time you would normally spend next week on hold with "Mike'd Up" waiting to get on with Mike to tell him how you figured out the perfect trade to get rid of Teix so they can sign Pujols to play first and put that time towards your wife or your friends or your job or something more productive.

Unless he secretly has the stuff to be a dominant pitcher somewhere inside him, the Yankees have no use for Albert Pujols.  They have Teix at first, The Horse at third (assuming Pujols could even still play third), and they need to keep the DH spot open for Jesus and The Horse's rest days.  And while Pujols would almost certainly be an offensive upgrade over all 3 of those guys, he represents something the Yankees are trying to move away from in their FA agent pursuits, an All Star on the north side of 30.  The A-Rod contract fiasco in '07 has left the team strapped with the worst contract in baseball for a player who is starting to fade, and it has left the team with fewer options to pursue through free agency and no way to move that contract to free up some money if the front office is serious about keeping the payroll at or as close to $200 mil as possible.

And that's not to say that it's a foregone conclusion that Pujols is going to start falling apart next year physically and production-wise.  It's merely pointing out that he is closer to moving away from the prime of his career than towards it, he's going to be expensive as fuck, and he doesn't fill a position of need for the Yankees.  In fact, Pujols probably needs the Yankees much more than they need him.  Everybody knows that the Yankees have the most money to spend, so when you're heading into free agency you want them involved, or at least you want other teams to think they're involved.  Pujols and his agent are no different, and it's to their benefit to try to drum up the most Yankee-related interest as possible to force their real targets to cough up the most dough for the most years for Albert.  It's a smart strategy to take, but it doesn't mean the Yankees really will be or should be involved in the process.

Albert Pujols is a dominant player, a surefire HOFer, and as last night showed, he's still capable of being one of, if not the best, player in all of baseball.  But I don't see any scenario where he ends up in pinstripes next year and I don't think anybody in the Yankee front office or fanbase should even consider it.  The offensive foundation is fine, and so is the defense.  The bullpen is stacked, but the rotation is still the biggest area of need and that's where all the focus needs to be.  Having Albert in the Yankee lineup would be a dream come true, but that's exactly how it should stay in the minds of Yankee fans, a dream.
Posted by Unknown at 10:38 AM No comments: