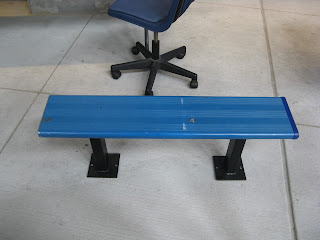 IT'S OFFICIAL.  I REQUESTED THE AFTERNOON OFF FROM WORK ON THURSDAY TO BE ABLE TO WATCH AND LIVE BLOG OPENING DAY.  IF YOU HAVE NOTHING BETTER TO DO, OR EVEN IF YOU DO, PARK YOURSELF AT A COMPUTER AND JOIN THE PARTY. **
Posted by Unknown at 12:21 PM No comments:

- Making Gustavo Molina the backup catcher (seriously, who is this guy???)
- Sending Jesus Montero to Triple-A (good hitting or bad, good defense or bad in ST, the kid is one of the 25 best players on the team and he should be on the 25-man)
- Not announcing Feliciano's replacement (might want to get on that)

More good calls than bad made yesterday by the Yankees, and nothing really surprising.  You can't be upset about any of that (except maybe Molina-for-Montero).
Posted by Unknown at 6:44 AM No comments: