"CC is a stud, we know that... The only thing keeping him from being the #1 starter in the postseason rotation is serious injury, kidnapping, alien abduction, or death." 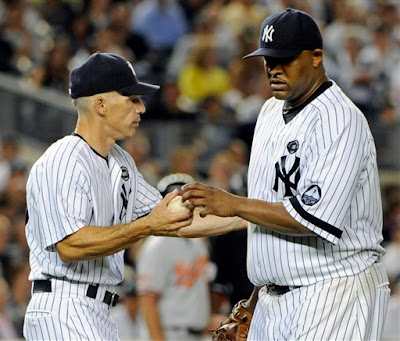 Apparently Joe is "playing it safe" with the A-Horse tonight, giving him a night of oats and a good brushing in his stable rather than a 3rd straight game on wear and tear on his body.  Can't argue with that logic when the team is still 2.5 up on the Rays and has back-to-back big series' against the Rangers and Rays after the Orioles leave town.  Better to keep those 4 legs fresh for when the Yankees really need them.

At least Gardner is back in the leadoff spot tonight...
Posted by Unknown at 3:55 PM No comments:

Time For Another Evaluation?

After A.J.'s horrible start against the White Sox, Joe said he was going to "evaluate" the rotation and make some decisions.  The only real decision he made after that day was to re-insert Javy Vazquez into the rotation for Dustin Moseley, but since then there really haven't been any solutions to the problems plaguing the rotation.  A.J. has pitched better since Joe dropped the "E" word, but as of this morning we are still looking at more questions than answers.

- CC is a stud, we know that.  He rebounded from his little bump in the road by one-hitting the A's last week and in his start today he'll be gunning for his 20th win of the season.  The only thing keeping him from being the #1 starter in the postseason rotation is serious injury, kidnapping, alien abduction, or death.

- A.J. hasn't been great in his last 2 starts, but he also hasn't been awful, and for A.J. that's pretty damn good.  He has at least given his team a chance to win in his last 2 outings, something he hadn't been doing, and his curveball has looked much better the last 2 times out.  If the playoffs were starting today, he would most likely be getting the ball in Game 2.  Joe has shown a willingness to stick with A.J. and let him work his problems out, so it's on A.J. to improve and start to maintain some consistency moving forward.

- Phil Hughes is having real problems right now.  He's not pitching horribly, but he is also not pitching efficiently.  He had 2 starts in a row in which he walked 5 batters, and though he was able to fix that in his last outing on Sunday, he still got slapped around for 6 runs and 7 hits, including a couple of 2-run homers on horribly-located pitches.  His biggest issue is he can't put batters away right now.  He gets to 2 strikes and then guys foul off the shit out of everything until Phil makes a mistake.  His stuff still looks good, so we still can't point to fatigue as the cause, but something is definitely amiss with Phil right now and he's getting pushed to the back of the playoff rotational line.

- Javy continues to be a riddle wrapped inside a mystery inside an enigma with a big old conundrum bow on top.  After being demoted, he was lights out in his 2 outings out of the bullpen and earned his rotation spot back after his 4+ innings of shutout ball in relief of Dustin Moseley.  His velocity was up, his sharpness on his breaking pitches was back, and he looked more confident on the mound.  On Saturday all that went away.  The low-90s fastball was gone, the break was gone, the demeanor on the mound was gone, and it was Moseley coming in to bail him out in the 5th inning.  At this point, it might be worthwhile to ask whether Javy is better coming out of the 'pen.

- Ivan Nova continues to be the wild card in all this, and his stock took a hit with his last subpar outing.  For now he will stay in the rotation, but his future in it, with Andy possibly coming back this time next week, could be in jeopardy if he lays an egg the next time out.  There still isn't much of a book on Nova, but Joe doesn't seem willing to give him some lead on the leash and let him work out of trouble when he gets into it, so if he's not on, he isn't going to be out there for long.

- Andy will make a rehab start for Trenton on Thursday with a 45-pitch limit.  After that, he should have another one more with a 75-pitch limit and then would be set to rejoin the team either a week from this Sunday or early the following week.  However, given the Yanks current rotational struggles and the fact that they are set up to have CC, Nova, and Javy start in what could be a crucial series against Tampa next week, if Pettitte feels good after Thursday, there's a chance he could be back with the team taking Javy's spot against Tampa.

Personally I don't like this idea.  If 2 rehab starts were planned then Andy should make 2 rehab starts before coming back.  He's already been delayed once from trying to come back too soon, and the Yanks are still ahead in the division and playoff races right now, rotation issues aside.  Seeing as how they are already having trouble getting length from guys like Hughes and Javy right now, it makes no sense to bring a guy back off injury and put him on a 75-pitch limit at the Major League level.  Let Andy get fully healthy, get his stamina back, and put him back in the rotation when he can give you a full start.

In the mean time, Joe needs to figure out what he's going to do with the rest of the crew.  Clearly something needs to be done with Phil's approach right now, clearly Javy is still a major question mark and somebody that Joe doesn't trust, and clearly Joe doesn't seem to have any kind of plan for Nova.  If he can put his last start behind him, Nova could be the dark horse that stays in the rotation and sneaks onto the playoff roster.  But, like with Javy's arm strength, A.J.'s mental stability, and Hughes' innings limit, that is a big "IF."
Posted by Unknown at 10:49 AM No comments: