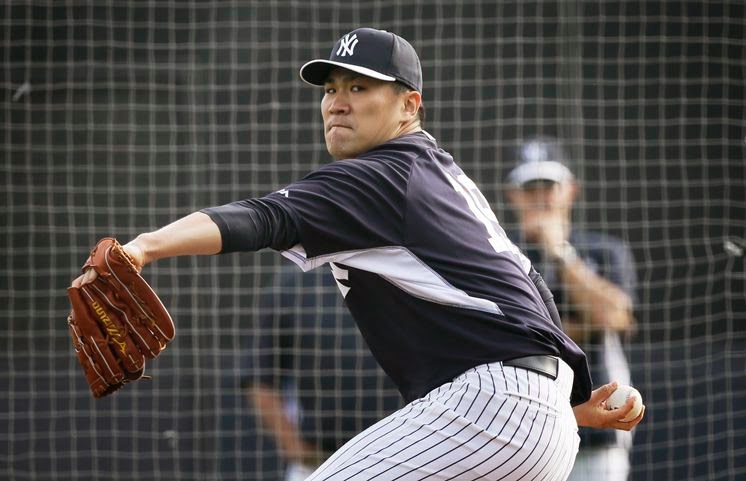 Go get 'em tonight, Ma-kun.  We're all cheering for you.
Posted by Unknown at 4:30 PM No comments:

- On Monday, Chad Jennings of LoHud got some early insights on Joe's bullpen management strategy for this season.

- William Juliano of The Captain's Blog dished out his predictions for 2014.

- On Tuesday, Andrew Mearns of Pinstripe Alley took a look back at some of the big Opening Day debuts in Yankee history.  Too bad none of the new guys this year added to the list.

- On Wednesday, Derek Albin of Pinstripe Pundits tried to put this year's starting infield in the right perspective by examining where their projected output would rank them in Yankee history.

- Nick Peruffo of Minor Matters had all the highlights from Double-A Trenton's media day.

- On Thursday, Michael Eder of IIATMS/TYA analyzed the differences in Mark Teixeira's swing during Spring Training and Opening Day to see if he was compensating for his wrist.

- Mike Axisa of RAB broke down CC Sabathia's Opening Day pitch location plot to try to find the cause of his turnaround from the first 2 innings.

- On Friday, SJK of NoMaas reminded everyone of who Masahiro Tanaka is replacing in the rotation and what standards he has to live up to.

Today's jam is "Trippin' On A Hole In A Paper Heart" by STP.  Hadn't heard this in a long time and I caught the end of it on the radio the other day. 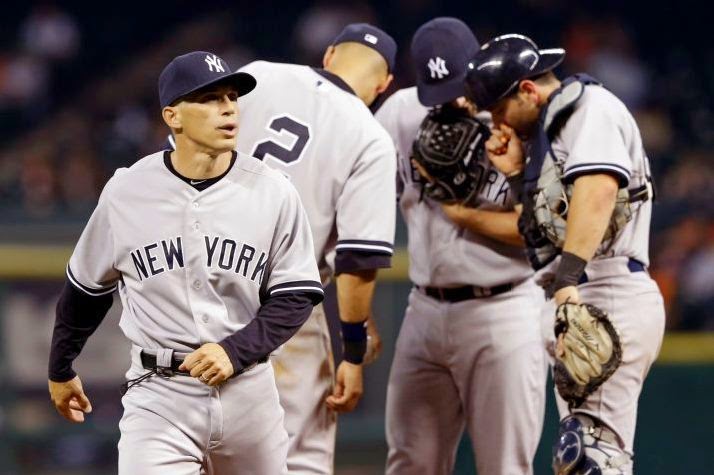 When you're coming off 2 straight losses to what was the worst team in MLB by a wide margin last year and you decide to sit your leadoff hitter, cleanup hitter, and starting third baseman in the 3rd game of the season, that's normally a decision that will draw some questions.  I certainly had a few in my head when I got a look at the lineup before last night's game.  I didn't understand why Joe would want to rest Brian McCann already when he's got a Friday night/Saturday afternoon setup this weekend in Toronto, and I really didn't understand why he felt the need to play the platoon matchup game with Kelly Johnson and a guy making his MLB debut in Yangervis Solarte when Johnson has a higher career OPS against lefties than righties.

If you don't have a calculator handy, that's an even and ugly 18.00 ERA in the 1st inning and a much prettier 2.45 ERA in every other inning pitched by the Yankees' starters in the first 3 games.  They haven't done themselves any favors by giving up early runs and putting the offense in early holes and that's a trend that can't continue once the opponents start being better teams than the Astros.  Nothing to really be worried about long-term though.  Pitchers are still working themselves into full game shape and there's always some extra adrenaline flowing in your first start of the season.  Just strange to see the Yanks stumble out of the blocks 3 games in a row. I'm smart enough now to not be at all concerned about starting the season 0-2, but it's not like I would have been happy to see the Yanks open the season getting swept by a team that lost 111 games last season.  In that sense, last night's start was the first big test for Ivan Nova in 2014.  He was the starting pitcher tasked with preventing the sweep and he was supported by an offense that had produced 3 runs in 18 innings and was without its leadoff hitter, cleanup hitter, and starting third baseman.

- Nova, like those before him, didn't get off to a good start.  2 sharp singles and a HBP and it was bases loaded, nobody out in the top of the 1st.  A force play scored a run, a walk loaded the bases again, and in what turned out to be a HYYUUUUUUUUGE play, Nova escaped the inning on 4-6-3 a double play.

- Interestingly enough, it was Ellsbury and Johnson's replacements who got the rally started in the top of the 3rd.  Ichiro and Yangervis Solarte singled with 1 out, then came around to score on a Brett Gardner single and a Carlos Beltran sac fly to give the Yankees their first lead of 2014.

- Nova breezed through the next 3 innings, mainly on the strength of some well-timed double plays to end the 3rd and 4th, but then hit the skids again in the 5th when he gave up another run.  A 4th double play ball of the night kept it at only 1.

- The offense managed to keep tacking on with a Derek Jeter RBI single in the 5th and what was scored as an RBI single for Solarte on an infield pop-up that the Astros decided not to field.

-The 4-2 lead they built held up thanks to some stellar bullpen work behind Nova.  Adam Warren and Shawn Kelley didn't allow a baserunner and struck out 4 in 2.1 IP and D-Rob went 1-2-3 for his first save of the year.