What Can Reid Brignac Do For You?

In their now never-ending quest to upgrade their infield depth, however so slightly, the Yankees acquired Reid Brignac from Colorado on Friday for $75,000.  This was the second time they went back to the Rockies well in a few weeks after acquiring Chris Nelson.

As for what he can do, the honest answer is not much.  At least not offensively.  Brignac is a career .228/.270/.321 lefty hitter with a BB rate under 5% and a K rate just less than 25%.  He was only slightly exceeding those career lines in 53 PA for the Rockies, so the Yankees didn't purchase him for his offense.  What he can do is play shortstop better than anybody the Yanks have right now, and he's also useful at second or third base.  If Eduardo Nunez is going to miss another week or so, and signs point to that happening, he could be a SS platoon option with Jayson Nix.

Brignac is basically a slight upgrade over Alberto Gonzalez, and if the Yankees can slightly upgrade at a position of need for such a minimal cost then they should do it.  Gonzalez was DFA'd to clear a roster spot, and Brignac was scheduled to be the starting shortstop this afternoon, so the Yankees seem ready to put him to work and see what they can get out of him for the next few weeks.
Posted by Unknown at 1:36 PM No comments: 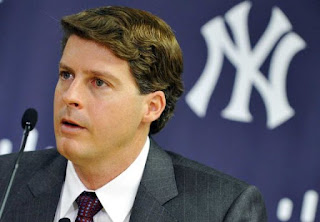 P.S.- "I knew that the guys we got in the offseason were veterans. Whether people thought they were worth getting or not, I felt they were veterans and this is what you expect veterans to do.”  You knew that old players who had been in MLB for years and years were veterans?  Real astute observation.  I'm sure that was the determining factor in Hafner getting signed.
Posted by Unknown at 9:49 AM No comments: