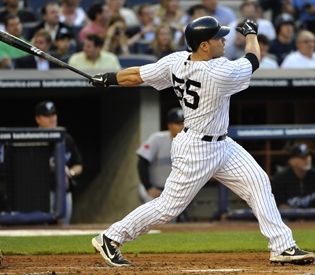 (Looks like a decent swing to me.  Courtesy of The AP)
As I watched last night's tremendous display of baseball by the Yankees and laughable ineptitude of the Brewers, I took notice of Russell Martin's line when he stepped in for his first at-bat and was instantly reminded of a post topic I wanted to cover last week and didn't get around to.  That topic being just what the hell is up with Martin?  He started the year hitting like a machine and making Cash look like a genius for signing him.  Since then, he's been bothered by some injuries and his production has dropped off significantly.  Observe:

I'm well aware that his torrid April wasn't sustainable, but I also didn't expect him to fall off a cliff as bad as he has since then.  from 170 wRC+ to 29 isn't just slumping.  That's falling right off the face of the earth.  So what is there in the numbers that can explain this dramatic decline in production?  For starters, we know he's not pressing at the plate and swinging too much, because the one thing Martin has done is consistently walk.  His BB rate doubled from April to June (8.2% to 16.7%), and he's still at a very nice 10.2% rate this month.  He also doesn't seem to be making much weaker contact than he did earlier in the year as his LD% has gone from 19.0% in Mar/Apr to 18.2% this month.

Martin could very well be suffering from the same BABIP luck that Teix is right now, and there is some support for that.  His value was at its highest, .281, in the first month of the year, and is currently sitting at a measly .205 in June.  The percentages also show that Martin is hitting more groundballs and fewer flyballs this month than he has all year, so it seems reasonable to expect that, even if they are decently struck balls, if they're on the ground there's a good chance they're going to produce more outs than hits.  And you definitely aren't going to be racking up any extra bases hits with the ball on ground more, no matter how fast you are.

My thought is that Martin is still probably feeling the effects of his earlier injuries, and while they aren't enough to keep him out of the lineup nor produce any significant holes in his swing, they might be just enough to have him keep them in the back of his mind when he's at the plate and adjust his approach slightly so as not to re-aggravate the injury.  That combined with the resulting increased GB rate should logically add up to a lower BABIP and lower all around offensive numbers as a result.  And just as it would have been insane to expect him to put up a .963 OPS all season, it would also be stupid to think that Martin will stay in this prolonged slump for the rest of the year.  Sooner or later things have to balance out and we'll probably see him back around the .250/.350/.410 line.
Posted by Unknown at 12:28 PM No comments: 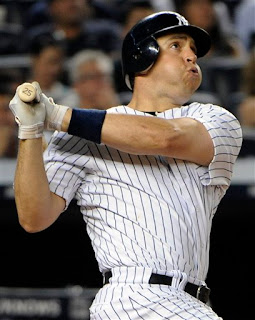 Now I'll be fair and admit that maybe Teix is guilty of becoming a little pull happy with the short porch at The Stadium, and so he could be contributing to his own bad luck.  After all, both his BABIP and BA numbers dropped off last year from where he was in '09 while his power stayed the same.  But Teix is too good a hitter to be wallowing away in the Chone Figgins and Kurt Suzuki levels of BABIP mediocrity.  Sooner or later, some of these balls have to start finding gaps and green space instead of gloves.  And when they do, watch out.
Posted by Unknown at 7:45 AM No comments: