Status Not Looking Good For Jeter

Derek Jeter said he was going to be ready to start this season.  Both he and the Yankees did everything in their power to try to make that happen.  When his ankle started to act up earlier in spring camp, both he and the team passed it off as a blip on the radar.  Now, on the day he was supposed to be eligible to come off the DL and return to the lineup, Jeter finds himself no closer to coming back than he was when he first went on the DL.

There hasn't been much progress in Jeter's latest attempt to come back, as evidenced by this latest report from Bryan Hoch today.  What Jeter is doing now is the same thing he was doing two months ago when he first really started to get back to baseball activities, and this second go-round with these incredibly watered-down activities is happening at a slower pace than two months ago.  Jeter still isn't taking batting practice, he still isn't taking real fielding practice, and he still can't run the bases.  Those are the three fundamental activities for any baseball player at any position, and the plain fact of the matter is that there's no timetable for when he's going to start doing them again.  I've heard early May thrown around as the new possible return date, but even that looks like a stretch presently.

I said way back in November that I didn't think Jeter was going to be able to make it back in time for Opening Day, and my preference was that he and the team didn't attempt to rush his comeback to make that happen.  They did, it didn't work, and now we don't know when he's going to be back on the field.  Normally I like to puff out my chest and sing my own praises on one of the rare occasions when I'm right.  In this instance, however, I really don't want to.
Posted by Unknown at 3:14 PM No comments: 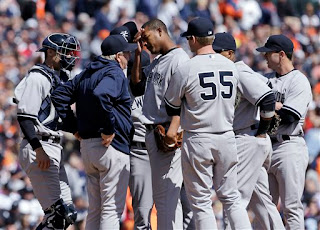