Since I blew the Yanks-Sawx ST live blog, I'm thinking it's time to break that seal  for 2014 and make up for it this Sunday night.  Don't mark it on your calendars yet, but be on the lookout for confirmation sometime this weekend.  Now onto the links!

- On Monday, Chris Mitchell of Pinstripe Pundits rifled through the last 20 years of bad, small sample size offensive seasons to find the 5 worst in team history.  No surprise that 2 of them came from last season.

- On Tuesday, Mike Axisa of RAB pointed out the great job the Yankee rotation has done commanding the strike zone so far.

- Michael Eder of IIATMS/TYA put Masahiro Tanaka and his first MLB start under the PITCHf/x microscope to see what it could teach us about his approach going forward.

- Matt Mirro of Yanks Go Yard mused on ways to keep Yangervis Solarte's bat in the lineup when Teix returns.  If he keeps hitting like he has been, that's something Joe will have to figure out.

- On Thursday, Chris Mitchell of Pinstripe Alley proposed the idea of trading Gary Sanchez for a useful Major League piece and looked for some previous trade comparisons to establish a baseline for return value.

- SJK of NoMaas broke down the Yankees' first 9 games to find their strengths, weaknesses, and explanations for the sub-.500 start.

- On Friday, Chad Jennings of LoHud had more on the budding relationship between Brian McCann and the pitching staff.

- El duque of It Is High... commented on the change in John Sterling's HR call agenda and how his calls have started to lose their luster as a result.

This Friday's jam is "Slacken" by Truckfighters.  These dudes couldn't sound more like they're from Cali if they tried, but they're actually Swedish.  They're swinging through Milwaukee in mid-May and I intend to see them when they do. 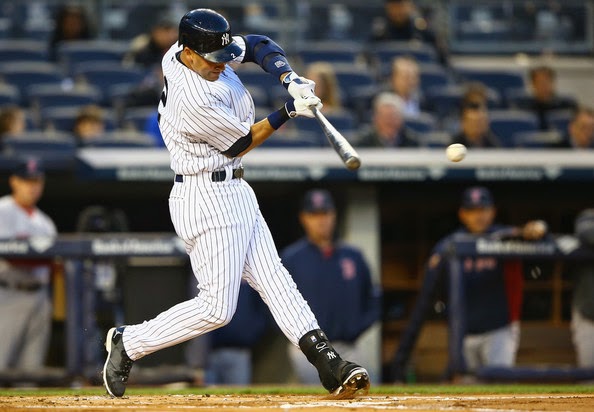 A few days ago, Jeff Sullivan of FanGraphs posted a very cool piece analyzing each team's early pitch framing success.  Using an existing pitch framing model, he tracked all called pitches for each MLB team to determine how many more or less called strikes they were getting compared to the expected average.  The Yankees topped the list with +25 called strikes, 3 more than the next closest team and 9 more than the 3rd highest team, each of whom had a larger called pitch sample size than the Yankees.

There are plenty of disclaimers that have to be put on this.  Pitch framing is still a relatively new method of analysis and there are a lot of things that aren't factored into Sullivan's study, namely individual differences in strike zones by umpire and the effect that pitchers' command has on final pitch location and the catchers' ability to frame.  Based on those 2 factors, I'd say it's a little premature to start assigning run values to each additional called strike like Sullivan has, but at a high level this study shows that there is value in above-average pitch framing and speaks to the 2-sided skill set it takes to be an above-average team in that department.  Both Francisco Cervelli and Brian McCann rate as above-average framers, McCann decidedly so, and the Yankee pitching staff has a 6.1% BB rate, tied for 4th best in MLB.

When you're commanding the ball in or near the strike zone and have good receivers and framers behind the plate, you should have a very good frame rate like the Yankees do.  Over the course of a season, every additional called strike will add up to something positive for the Yankees in terms of win expectancy and that's always a good thing. 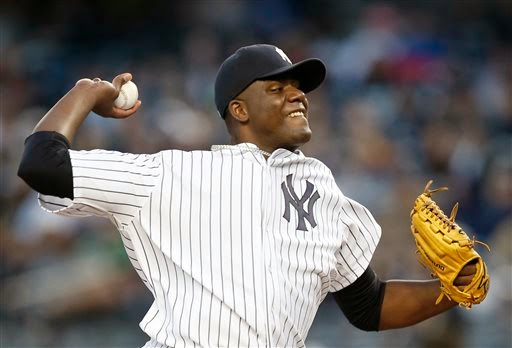 It was an ugly finish to the season-opening home series.  The Yanks lost 2 in a row to Baltimore, 1 by way of blowout and the other by 9th inning pitching meltdown, fell out of the brief lead they held in the division, and dipped back below .500.  They could have used a series-opening win against the Red Sox as a way to get things going in the right direction again.  They had Michael Pineda and a very short bullpen with no Kelley or Warren, not necessarily an ideal pitching situation against the dangerous Boston lineup.  As it turned it out, it ended up being just dandy.

- He gave up a few hard hit balls in the 1st, but Pineda settled in nicely and rolled through the Boston lineup the first time through.  Mixing 4-seamers, cutters, and sliders, he didn't allow a single hit and struck out 4 through 3.

- A fielding error to start the bottom of the 4th opened the door for the Yankees, and it was the big hitters in the middle who put a run together.  Carlos Beltran singled through the shift to put runners on the corners and Brian McCann yanked one inside the bag to plate a run.  An Alfonso Soriano GIDP made it 2-0.

- Hand substance or no hand substance.  Pineda was nasty through 6.  He only gave up 2 hits, struck out 3 more, and even started using his changeup a little bit.

- So obviously we all thought Dean Anna was going to hit his first HR of the season before McCann, right?  He did with 1 down in the 5th, starting another 2-run Yankee inning that ended with a Jacoby Ellsbury RBI single.

- Joe let Pineda start the 7th, but he ran out of gas quickly and it showed when he hung a cutter up to Daniel Nava that Nava hit for a solo HR.  1 more hit and it was over for Pineda and on to the bullpen.  Cesar Cabral struck out the 2 batters he faced and handed it over to David Phelps, who cruised through the final 2.1 innings in order to get his first career save.