The "I'm Stuck Being A Cubicle Monkey" Mini-Linkapalooza 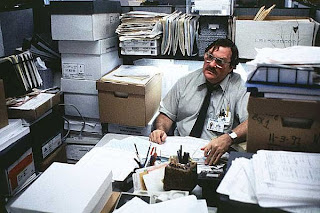 (I'm going to burn down the building)
Glaring lack of posts over the last 2.5 days, I know.  The 9-5 job is kicking my ass all over the world right now, to the point that I'm eschewing eating my lunch on my lunch break to be able to put SOMETHING up on the blog.  And that something is a quick look around the Yankosphere to see who is devoting enough time to churning out quality stuff in an effort to make up for my lack of activity.  Sorry I can't be a part of it.

- Mark Feinsand of the Daily News has a piece about Eric Chavez and how he thinks he can help the Yankees this season.  Sorry, Eric, but making sure all the ice and ACE bandages get used up doesn't qualify as help in my book.

- Cliff Corcoran at Pinstriped Bible examines the Russell Martin health situation and takes a bit more of a positive approach than I did.  Hey, somebody has to.

- A couple bits on The Pitcher Formerly Known as Mark Prior.  Chad at LoHud had a little piece on Prior's capabilities and my eyeballs almost fell out of my head when I read that he's only pitched 12-13 innings since '06.

Ben Kabak at RAB is waving his Prior flag, rooting for Prior this season.  As for me, rooting, yes.  But expecting anything?  Hell no.  Not with just 13 innings over the last 5 years to work from.

- Lastly, Larry Koestler at TYA commits a nearly unforgivable sin by previewing the 2011 Fraud Sawx.  I know he's just doing his job, but for me, the only word that I need to know for the 2011 Red Sox is "BOOOOOOOOOOOOOOOOOOOOOOOOOOOO!!!!!!!!"
Posted by Unknown at 12:45 PM No comments: