This was hinted at over the weekend and it's become a reality today, at least according to Josh Norris' tweet earlier this morning.  David Adams, almost 3 years removed from an ankle injury that seriously jeopardized his career, has been called up by the Yankees to play third base while Kevin Youkilis continues to rehab.

It's been a long, strange trip for Adams.  From hot young prospect to almost having his career ended to being the player who caused the Cliff Lee trade to fall apart to a long, tough rehab, back to top prospect, and now to Major League starting third baseman.  With a Robbie Cano extension looking more likely these days, a situation like this was Adams' best chance to break into the Majors and now he can take that chance and try to carve out a permanent role for himself.

No word yet on who will be sent down/DFA'd/released to clear a 25-man spot for Adams, although the smart money and every ounce of hope I have would be and is on Ben Francisco.  Should he get the axe, the Yankees would have a bench of Alberto Gonzalez and Chris Nelson covering the infield, Ichiro the outfield, and Austin Romine the backup catcher spot.

** UPDATE 3:17 PM-  The team has made it official, Adams is in the locker room, he might be in tonight's starting lineup, and Nelson gets DFA'd.  Francisco survives again. **
Posted by Unknown at 2:00 PM No comments: 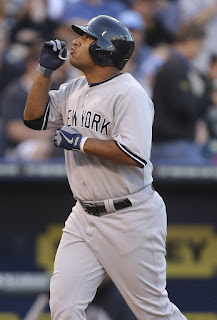 Actually it's shoulder "tendinitis" according to the team, but either way it means there's nothing seriously wrong with Travis Hafner.  There was a bit of a scare when his name wasn't in the lineup last night and it was reported that he was going for an MRI.  That MRI showed no serious damage, he was given a cortisone shot, and Joe implied that he could be back as early as tonight.

While it sounds like a bullet dodged here, a rare outcome when it comes to Yankees and injuries this year, it's still probably in everybody's best interests to give Hafner a day or two more than he actually needs.  If he feels like he can go today, play him tomorrow or Friday.  Hafner has been a walking DL stint for the last handful of years, and with the lack of depth in the lineup right now the Yankees need to keep him healthy and productive for as long as possible.  They're in a position where they have a small cushion in the division and are playing good baseball, so why not take advantage of that and give Pronk a little more time?  Short-term loss for a potential long-term gain. 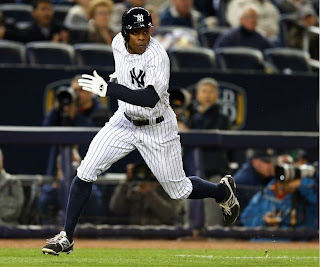