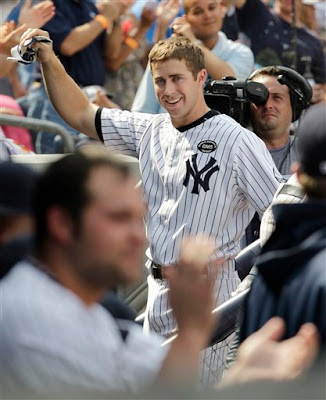 Things Could Always Be Worse...

... I mean I could be a fucking Mets fan.  Check this out from David Lennon's Twitter feed:

Yikes!  It's bad enough that the Mets are playing like complete dog shit right now, but they're also getting things stuck up their ass in the process?  No wonder nobody on that team can hit.  It's hard to generate any power on your swing when you're out there playing with a shredded rectum.

Free-Flowing Rant After An Ugly Loss 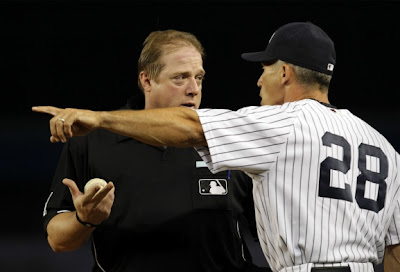 (Photo courtesy of The AP)
What the hell was that last night?  It was like there were ghosts in those Yankee uniforms.  2 runs in the first and then nothing after that.

What is the deal with the Yankees always being schooled by these no-name, first-time starting pitchers?  Those are the type of guys that the Yankees should feast on, and yet they always go out there and make these slobs look like Cy Fucking Young.  Seriously, Sean O'Sullivan?  Who the fuck is Sean O'Sullivan?  Dude gave up 2 runs in the first inning and then it's like everybody forgets how to hit.  The guy barely threw 50% of his pitches for strikes for Christ's sake!!!

And somebody needs to explain to me what the fuck Derek Jeter is doing up there at the plate, because it sure as shit ain't hitting.  You can practically plan your evening around his at-bats he's so predictable right now.  Every game you can pencil him in for a couple groundouts to short and a flailing strikeout at a pitch way out of the zone.  Fucking terrible.

Hughes was awful last night.  Couldn't locate the fastball, couldn't locate the change, and didn't throw enough curveballs (probably because he didn't feel confident he could locate it).  All of that adds up to not being able to put hitters away and that's exactly what got him in trouble last night.  You can't fall in love with the fastball if you aren't throwing it where it needs to be.

Are Chad Gaudin and Chan Ho Park trying to see who can get DFA'd first?  Lowest of low-leverage situations and they STILL can't get out of an inning unscathed.  I say drop 'em both like the bad habits they are and call up Romulo Sanchez this weekend too along with Mitre.

So far, so bad for the Yanks after the break.  This has been the exact opposite of last season.  They came into the break on fire and came out looking really inconsistent despite the 2-2 record.  They haven't had a good start yet from the rotation and the bullpen is still a fucking disaster.

P.S.- Joe, if you're going to get run, at least get your money's worth.  That was the softest argument I've ever seen out there last night.
Posted by Unknown at 7:41 AM No comments: