I got nothing this week.  Just looking forward to a Sunday sports day of Rangers, Blackhawks, Lamarcus Aldridge, and Yanks-Halos.  Now onto the links!

- On Monday, Caitlin Rogers of Pinstripe Alley pondered what the Yankees could do with Brian Roberts if he continues to not perform offensively.

- Mike Axisa of RAB looked to the early pitch type percentage breakdowns to see what major changes CC Sabathia was making to his pitching approach.

- On Wednesday, Chris Mitchell of Pinstripe Pundits examined the shift in Brett Gardner's BB rate and the resulting shift in his overall offensive performance.

- SJK of NoMaas stressed the importance of Derek Jeter maintaining a strong BB rate if his power is going to stay as low as it is early on.

- On Thursday, William Juliano of The Captain's Blog commented on the problems with MLB's rule book and inconsistencies in the enforcement of those rules that the Michael Pineda situation exposed.

- Matt Bove of IIATMS/TYA pointed out the downtrend in the production of Kelly Johnson and Yangervis Solarte, another sign that the Yankees should look for more infield depth.

- Greg Corcoran of Bronx Baseball Daily dished a heaping helping of observations from a few MiL games he's taking in early in the season.

- On Friday, John M of It Is High... put today's offensive numbers into historical perspective to give the appropriate amount of context to all the talk about the game becoming too "pitcher dominated" today.

- Chad Jennings of LoHud looked back at the eventful road trip that was.  When you stop and think about it, there really was a lot that happened in the last week.  Damn.

- SG of RLYW summed up the problem with Mark Teixeira's production in one definitive graph.

New Mastodon is out!  It got leaked early last week, formally released late last week, and I finally caught up to it this week.

It's definitely catchy but I'm hoping the rest of the album isn't as linear as this.  I bet it won't be.  You always have to have one song that will be a good fit for radio play.  This is most likely that song.

This was the always the endgame, even after Nova requested a second opinion on his partially torn UCL earlier this week.  Dr. James Andrews was given the second look and he echoed the recommendation of Yankees team doctor Dr. Ahmad that Nova have Tommy John Surgery on the ligament.

Nova will go under the knife for TJS next Tuesday, with Dr. Andrews himself performing the surgery.  It will officially end Nova's 2014 season, and with recovery time still an estimated 12-18 months, Nova will also lose most of his 2015 season.  A tough break for Nova and the Yankees.  Maybe this will help fix some of the minor arm issues he had leading up to the tear, but typically arm injuries mean more arm injuries.
Posted by Unknown at 9:17 AM No comments: 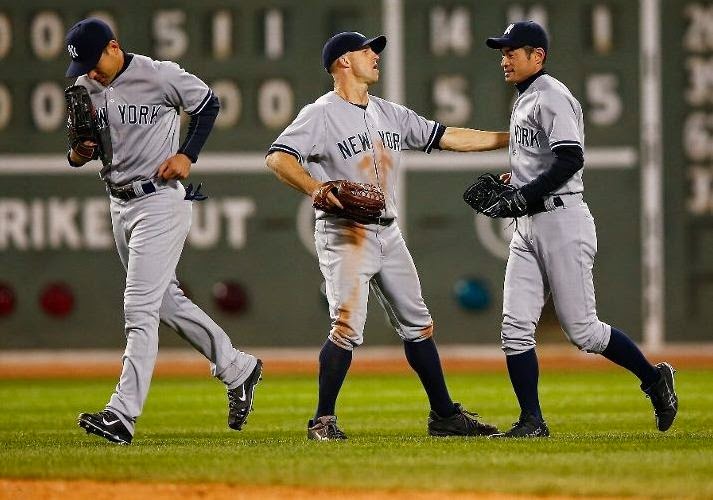