Happy 4th of July, everybody!  Hope you're already well into whatever activities you've got planned for this glorious holiday and not stuck inside somewhere with nothing to do but read this.  I've got a double-dip of family cookout during the day and a concert later tonight, but since I'll be traveling to Germany for week on Saturday I won't be able to do my normal Independence Day partying routine.  It's a little bit of a bummer, but what are you gonna do?  Now onto the links!

- On Monday, SJK of NoMaas begged and pleaded for a Rob Refsnyder call up.  He must have been really disappointed to get Wheeler instead.

- On Tuesday, Katie Sharp of IIATMS/TYA explained how David Price has been able to pitch so underratedly well this year, and how he's done against the Yankees as food for thought.

- Chris Mitchell of Pinstripe Pundits reviewed the progress of his top 10 Yankee prospects.

- El duque of It Is High... riffed on the "great arm" talk about Jose Ramirez and how meaningless a term it really was.

- SG of RLYW looked back at the projection numbers to see how much better or worse the Yankee offense should have been and could be in the second half.

- On Wednesday, William Juliano of The Captain's Blog pointed out a historically-significant display of age from the Yankees in one of their recent lineups.  Definitely not a good thing.

- Mike Axisa of RAB shone a light on the dwindling Yankee bullpen depth and how that may push them into the market for relief help at the deadline.

- John Beck of Pinstripe Alley made a case for the Yankees targeting Adrian Beltre at the trade deadline.  That would be pretty awesome actually.

- On Thursday, Brian Heyman of LoHud discussed Derek Jeter's playing time and had The Captain's thoughts on how the team has been playing.

- Daniel Burch of The Greedy Pinstripes called for Kevin Long's firing and made a suggestion for who should be hired to replace him.

We're going with all the American classics for today.  Wouldn't have it any other way.

Enjoy your long weekends, everybody.
Posted by Unknown at 12:00 PM No comments: 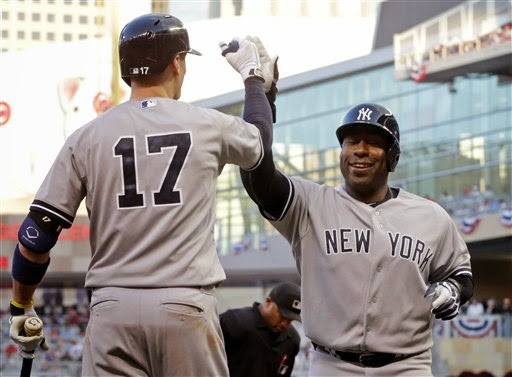