In case you haven't noticed, election season is in full swing.  You could probably tell from the insane amount of local, regional, and national campaign ads that are dominating your television.  And no, I'm not going to get political here because I hate everything about politics.  I think every politician out there is a lying criminal bastard who only has his or her best interests at heart.  I take the George Carlin stance to politics; I don't vote, I'm not registered to vote, and I never will be.  If you are politically active, then good on you, but it's all bullshit to me, and it gets even worse during major election years when I can't watch anything on TV without being bombarded by this nonsense.  Just get the fucking election over with so I can get back to only being pissed about the Yankees not getting a runner home from third with 1 out and not some carefully crafted 30-second smear campaign that's been approved by whoever.  Now onto the links!

- On Monday, William Juliano of The Captain's Blog pointed out the Yankees' weakness in the pinch hitting department in 2012 despite the high number of pinch hitting opportunities they've had this season.

- David Waldstein of The NY Times had a really cool piece on Ichiro Suzuki and the incredible amount of care with which he handles his bats.  A special shock-proof, moisture-free carrying case?  How fucking baller is that?

- On Tuesday, Brien Jackson of IIATMS put the "veteran pitcher vs. young prospect" argument in perspective for the 2012 season, reminding everybody that the veterans have been the most crucial part of this year's starting rotation.

- Benjamin Orr of Yanks Go Yard pondered Phil Hughes' situation and how he fits into the plans for the rest of this season, next season, and beyond.

- On Wednesday, Jorge Arangure Jr. of ESPN did an excellent profile piece on Rafael Soriano, tracing his life back to childhood and his early baseball experience.  Arangure did a similar profile earlier in the season on Ivan Nova and this one is just as good.  Definite must-read.

- Greg Kirland of Pinstriped Bible took an anti-return stance on Brett Gardner and touched on how Gardner's limited playing ability just increases the number of incomplete players the Yankees have on the active roster.

- DBurchHero of The Greedy Pinstripes laid out the pros and cons of bringing back Hiroki Kuroda next season, and the effect other teams could have on the Yankees' decision.  As long as it's a 1-year deal, I think bringing Kuroda back is a no-brainer.

- SJK of NoMaas compared Nick Swisher's overall body of work in his 4-year Yankee tenure against the rest of the MLB outfield to show how Swish won't be easily replaced if the Yanks do let him go.

- Brian D. of Yankees Fans Unite, on the same topic of the outfield's future, looked at potential changes coming to the Yankee outfield in 2013.

- On Thursday, Joe Pawlikowski of RAB pieced Mark Teixeira's 2012 season together to show what led to his 3rd straight down year offensively, and the negative impact his injuries have had on other spots of the lineup.

- EJ Fagan of TYA unveiled the fall edition of his Top 30 Prospects list, complete with a detailed explanation of his ranking system and some commentary on individual players.

- George S of Gutty Gritty Yankees questioned some of Joe's recent lineup decisions, specifically ones where Joe seems to be resting guys.  Like George said, it's too late in the year for that.

- On Friday, Chad Jennings of LoHud asked a very pertinent question given A-Rod's latest semi-injury; where exactly does he belong in the Yankee lineup?  My answer- 2nd.

We haven't gone old school in what feels like way too long for the Friday Jam, so to remedy that I'm breaking out my favorite Zeppelin song.  I don't actually think I've ever plays Zeppelin for the FJ, which is an absolutely criminal mistake on my part, one that I apologize for.  But they're on today, so enjoy.  And if you don't like Led Zeppelin, just do yourself a favor and stop listening to music.

How Are We Supposed To Feel As Yankee Fans Right Now?

I was really looking forward to this post.  I was fully prepared to write a Kate Hudson in "Almost Famous"-style, "it's all happening" post about the recent turnaround and positive momentum the Yankees were building at the right time as they headed into the final handful of regular season games against their 2 divisional doormats.  They had won 13 of 19 games, maintained sole custody of the AL East lead, shaved their playoff magic number down to less than a hand's worth of digits, and were getting healthier by the day.

CC was back and looking like the version of himself that everybody has been waiting for months to see; A-Rod was back, looking healthy, and helping to lengthen the middle of the batting order; Ichiro had turned back the clock to the mid-2000s and earned himself a spot at the top of the order thanks to his hot hitting.  Ivan Nova had been activated, Andy Pettitte had been activated, Brett Gardner and David Aardsma too, and there was still hope that we could see Mark Teixeira's goofy mug back on our TV screens at some point.  The Yankees were getting their shit together and re-positioning themselves to be the odds-on favorites to win the AL pennant when the playoffs started.  Then last night's game happened.
Read more »
Posted by Unknown at 9:00 AM No comments: 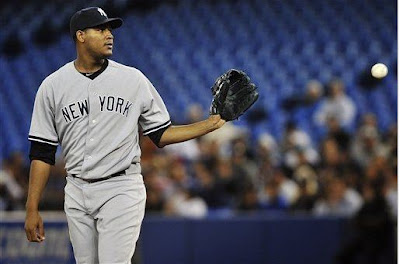 (Wonder if he threw his record-setting XBH allowed ball into the dugout.  Courtesy of the AP)

There's no other way to say it then to just say that the Yankees didn't have it last night.  There's really no excuse for it, certainly not the travel.  They went Minnesota to Toronto, that's nothing.  I make basically the same flight every time I go home from Milwaukee to LaGuardia and it's only a 1-hour time change.  I guess facing Brandon Morrow in Toronto meant they were doomed from the start, but to come in off a series win and a complete team win against Minnesota on Wednesday and not even come close to putting 1 run on the board is deflating and not the type of result you want or expect against a last place team like the Jays.

- Ivan Nova was a great combination of sharp and efficient through 2 innings, throwing 20 pitches and 16 strikes, but lost some of his edge in the 3rd, giving up a walk and a 2-run homer to Brett Lawrie to make it 2-0 Toronto.

- Shit didn't get any better in the 5th when things swung back around to the top of the order.  Nova gave up a 2-run double to Edwin Encarnacion to make it 4-0 and didn't make it out of the inning.  Just didn't have any kind of offspeed command.  Story of his season.

- I don't know what the deal was with the Yankee bats, but they couldn't solve the Brandon Morrow riddle through 6 innings last night.  Morrow only struck 2 batters out, and walked 2, but lived off the Yankees swinging early, swinging often, and making a lot of shitty contact.

- If that wasn't bad enough, the double play parade came back to town.  Nick Swisher hit a ball to the wall that was caught and turned into a DP in the 4th when Robinson Cano strayed too far, and Raul Ibanez rapped into an inning-ender to kill the 5th.

- Cano came to play, and sparked some life with a leadoff double and a follow-up walk by Nick Swisher against Morrow in the top of the 7th, but Morrow got the next 3 batters in order as his last hurrah to strand the pair.

- If there was one positive to take from last night's game, it was that David Aardsma finally made his return to the mound and his Yankee debut.  He gave up a solo shot, but whatever.  At least he's back pitching after over 2 years on the DL.

- Just for good measure, the Yanks put 2 more on to start the 9th, including another Cano hit, only to have the next 3 hitters fly out to end the game.