Not To Be A Downer Or Anything...

... But the hopes of the Yankee season rest on this guy tomorrow: 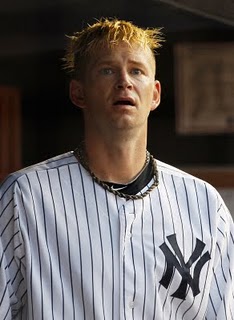 Jesus fucking Christ...
Posted by Unknown at 10:58 PM No comments:

3 Things to Watch For:

1) Verlander & CC The 2nd Time Around

With Game 3 being in Detroit, it would seem logical that Verlander has more of an advantage here than in Game 1.  But in looking at the numbers, Verlander's home/road splits are marginal (2.37/2.69 home, 2.43/3.26 road) and CC's road numbers (2.93 ERA/3.03 FIP) are just as good as what he did at home.  The bigger factor is going to be recent performance.  And in looking back at Game 1, CC appeared to be the better pitcher before the rains came (home run aside) while Verlander struggled with his command through a 25-pitch 1st inning.  If CC can carry over his apparently rediscovered command from Game 1 and Verlander is still having issues, the homefield advantage could be flipped on its head.

Jeter looked awful last night, Teix's new stance still isn't returning any dividends, A-Rod is a walking injury report, and the team is coming off of a rough offensive outing.  Surprisingly enough, Jorge Posada has been the best Yankee hitter not named Robinson Cano through the first 2 games, so it's unlikely Montero would unseat him tonight.  But we saw Joe roll the dice with Chavez last night to try to get a spark.  If Verlander is rolling and the offense is sputtering again in this game, I wouldn't be surprised to see him give Jesus an at-bat to try light that same spark.

Perhaps the lone good thing to come out of yesterday's late innings was the fact that both Joaquin Benoit and Jose Valverde had to work relatively hard to get through their innings.  23 in 2 innings was efficient for Benoit, but I'd be surprised if he was available for more than 1, and it took Valverde 34 to navigate his way through the 9th inning.  If their availability is limited, the next guy in line is Al Albuquerque, who needed all of 2 pitches to blow the game out of reach in Game 1.  Jim Leyland might have to be careful/creative to manage his 'pen if Verlander doesn't give him 7 or 8, while Joe theoretically has his Big 3 each available for more than 3 outs if needed (assuming he doesn't just decide to use Ayala again).  While they're counting on him to deliver tonight, the Yankees don't have to lean on CC quite as much as Detroit will on Verlander tonight.

Because of the above reason, Verlander will be the key to tonight's game.  If he's got the adrenaline in check early and can work through the first couple innings without throwing 60+ pitches, he puts himself in a good position to go the distance and his team in a better position to win.  If the Yankees can work counts and foul off pitches against him like they have all season, the advantage he provides becomes negated and things swing New York's way heading into the late innings.  If there are any Cy Young voters out there tonight who still aren't sold on Verlander, this is his chance to end those doubts (and don't even try to argue that postseason doesn't mean anything for that.  You and I both know better).

The Tigers got the split they were looking for in New York and now have the homefield advantage in a best-of-3.  They can swing the momentum even further in their favor tonight, and they've got the guy they would want on the mound to lead them.  But the Yanks are countering with their hoss and tonight should be the all-time ALDS pitching matchup we were hoping to get in Game 1.  It's Verlander vs. CC, ace vs. ace, strength vs. strength, and fire vs. fire. 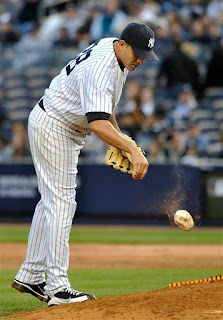 (Get the fuck off my mound.  Courtesy of The AP)
** This is based on my listening to the last 3 innings of yesterday's game in the car and reading the various game recaps from around the Yankee blogosphere **

- All in all, Freddy didn't have a bad outing yesterday.  He got beat by Miguel Cabrera, which is something a lot of other pitchers can relate to, and his final line didn't look great when it's paired next to 6 innings of shutout ball.  But between the home run and the rough 6th inning he only allowed a couple hits, didn't walk a batter, and struck out 6, which is damn good against the Detroit lineup.  But like we saw with Fister in Game 1, a few bad pitches here and there can ruin your day and that's what happened to Freddy.

- I'd like to give the kid credit, but when you're a flyball pitcher with a 5.23/4.78 ERA/FIP split on the road this season pitching in Yankee Stadium, I just can't.  It's flat out unacceptable that the Yankee offense could do nothing against Max Scherzer yesterday.  My buddy who was watching the game said he was getting the Maddux-Glavine treatment on the corners big time, which could have helped, but there is just no reason why the Yankee offense should ever get shutout (and almost no-hit) by the likes of Max Scherzer.

- There's a lot of calls for A-Rod to be bumped down in the order with the way he's swinging the bat right now, but I'm going to take it a step further.  I think he needs to be out of the lineup and on the bench.  He is injured.  Not hurt, injured.  Whatever is wrong with his thumb and his knee is worse than the Yankees are letting on and I can't wait to hear what the real injuries are once the season ends because he looks horrific at the plate.

He has no power or speed in his swing right now, and he's a black hole in the cleanup spot of the order.  Despite Joe's best efforts to convince us, A-Rod doesn't even come close to passing the eye test right now  in terms of healthy and I think it's better for the team if he takes a seat and lets somebody healthy swing the bat.

- And while we're speaking of The Horse, a big "fuck you" to all the fans who booed him yesterday after he popped up in the 8th.  The guy is clearly hurt and even though he's useless right now, he's still out there trying for his team.  Where were all those boos for Teix and Swish when they flailed through the '09 and 2010 postseasons?  Where were the boos for Jeter yesterday for his 0-5 with 2 Ks, a costly error, and about 9,000 guys left on base?  Booing A-Rod because he's an easy target is cheap, low, and the sign of a stupid fan.  The people who did that yesterday shouldn't be let back in The Stadium for Game 5.

- I didn't have a problem with Joe pinch hitting Chavez for Gardner yesterday.  Yeah, Gardner had made solid contact the last time up, but the offense was still anemic and Joe was looking for a spark.  It didn't work out, but in that situation I thought it was worth a shot.

- What I have a huge problem with is Joe waving the white flag in the 9th by bringing out Luis Ayala AGAIN!!!  This is the same guy who blew the last game of the regular season and couldn't manage to work through an inning with an 8-run lead to close Game 1.  Question- What's wrong with this picture?:

Answer- EVERYTHING.  You don't hold your best guys back in a 3-run playoff game where you have last ups.  Bring them in and shut the other team down to give yourself a chance.  And with the way the Yankee 9th played out, that run loomed huge.  A day after he talked about having the ability to use his big guns multiple times thanks to Nova's work in Game 1, Joe goes back to his worst bullpen guy in a close game.  Just a fucking horrible, stupid, unforgivable decision by Joe.

- Last one on Joe, and I know I'll be in the minority here, but how the fuck does he not pinch run Dickerson for Posada after Jorge's triple in the 9th?  I know the logic is that the 1 run doesn't mean that much in that situation, but I disagree.  Every run is important when you're down in the bottom of the 9th and you want to give your team the best chance to score as many as possible.  Sure, it would have been nice for somebody to crank a HR, but if there's a shallow fly ball hit to right center, I want to make sure that run from 3rd will score and cut down the deficit.  Jorge would never make that play, but Dickerson would.  That's what he's on the roster for and Joe didn't use him in a situation tailor made for Dickerson's skill set.  In the end, it didn't mean much, but that was still an awful non-call by Joe in my mind.

That's it for Game 2.  It sucked and it's over.  Let's move on to Game 3 and the Game 3 Preview coming this afternoon.
Posted by Unknown at 9:17 AM No comments: