Where Have You Gone, Brett Gardner? 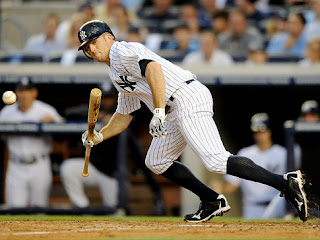 There has been plenty of discussion around the Yankee blogosphere about the offensive struggles of Jeter, A-Rod, Granderson, and such this year, and with good reason.  None of those guys are having the type of season we're used to seeing or expected from them this year.  But one of the guys who has been struggling the worst of all lately has been Brett Gardner, and that could have something to do with the continuing lack of spark in the offense.

On June 30, Gardner was hitting a cool .321/.403/.418 for the season and just had just come off a month where he put up an insane 1.006 OPS.  Gardner was hitting the piss out of the ball, mixing in a few extra-base jobs here and there, and getting on base at a freakishly good rate because of his patience and walk totals.  In the month of July Gardner hit .221/.375/.338 and his seasonal tripleslash dropped to .296/.396/.398.  The on-base % was still there thanks to 18 walks in the month, but Gardner had stopped putting up the 2-3, 3-4, 4-4 nights at the plate that had in June and his numbers suffered a bit.  Nothing drastic, but certainly not at the All-Star level he had been performing at.

Fast forward to today.  After last night, Gardner's line in August is .077/.077/.115.  He is just 2-26 in the month and 2-30 going back to the last 2 games of July.  Most startling, though, is the big goose egg in the BB column of his stat sheet.  Gardner has not drawn a walk all month, and that combined with his cold streak swinging the bat has left him with just 1 SB for August.  Gardner's tripleslash for the season currently sits at .279/.375/.376, a far cry from where he was a little over a month ago even if it still is above league average.

Now it would have been crazy to expect Gardner to keep up his high BABIP all season long, and you could certainly expect that some bad luck has something to do with his recent slump.  But he also seems to have lost some of his trademark patience during the last few weeks.  The zero walks are one telltale sign of that, as are the 11 Ks he currently has.  Gardner hasn't struck out more than 19 times in a month all season long, but he is already almost halfway to 30 for August after just 9 games.  In July, Gardner was able to counteract his cooling bat and still be offensively viable by drawing walks and getting on base, where his speed becomes a huge asset.  In August, the numbers suggest Gardner is swinging at more pitches, taking fewer, and making out after out instead of letting his patience work for him.

Now far be it for me to suggest that Gardner's supposed approach of hacking his way out of a slump is a bad idea.  I sucked at baseball when I used to play, and that's why I quit and played lacrosse through middle school and high school.  But in my opinion, Gardner has gotten away from what made him successful in the first half of the season and the fact is he just isn't as gifted a natural hitter where he can just swing his way out of a slump.  With guys banged up and slumping, the Yankees need Gardner to be a spark plug at the bottom of the order.  If he isn't doing that with the bat, then fine, but he still needs to be focused on getting on base any way he can rather than forcing swings because that's where his biggest strength comes out.

The Yanks haven't gotten much from the bottom of the order since the trade deadline, so the more chances to get Gardner on and turn the lineup back over to Jeter, Swish, and Teix, the better.  Take a few walks, drop down a few bunts, and don't focus so much on trying to get hits to break out of this slump, Brett.  Everybody goes through slumps and Gardner is no different, he just seems to be dealing with his in the wrong way.  Get back to being patient and working counts and good things will come.
Posted by Unknown at 1:03 PM No comments: 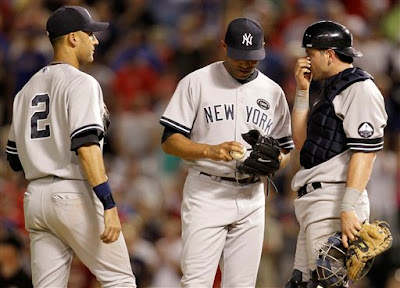 Of course, when you're starting lineup is missing half its regular members, things like that will tend to happen.  Teix should be back today, and hopefully Cano takes enough Flintstones vitamins to get over his cold and get back in his spot in the middle of the order.
Posted by Unknown at 7:41 AM No comments: