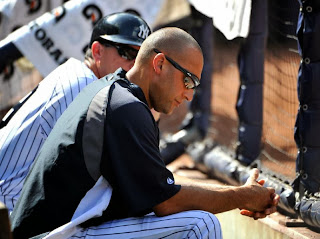 Report: Yanks Have Almost Made Up Their Minds On QO Decisions

Qualifying offers have to be made by Monday, and according to Jon Heyman's latest report, the Yankees are on the right path with their decisions.

Heyman reported yesterday afternoon that the Yankees will make qualifying offers to Robinson Cano and Hiroki Kuroda, and they're "leaning" towards making one to Curtis Granderson although they're still undecided there.  Granderson, as I've mentioned before, makes a ton of baseball sense for the Yankees next year, but that extra $14.1 mil tacked onto next year's payroll could be a problem in trying to get below the luxury tax threshold.  After seeing the fancy accounting moves the team made yesterday to re-sign a 40-year-old shortstop, that goal still seems to be the primary one.

The best news to come out of Heyman's report?  Confirmation that the Yanks won't be extending a qualifying offer to Phil Hughes.  Not that that comes as a surprise at this point, just a relief.