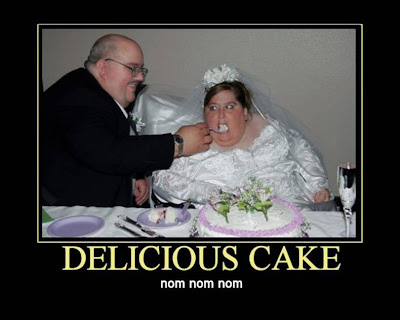 It's good that Teix and A-Rod seem to be coming around.  It's better that Jorge is back in the lineup and Andy will be back on the mound this weekend.  And it's best that this latest road trip is over and the Yanks can come back home to face their favorite whipping boys, the Twins, before a pair of 2-game series against the Sox and Rays next week.
Posted by Unknown at 10:21 PM No comments: 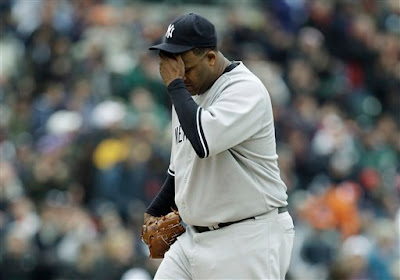 I mean, when you're rolling out a starting outfield of Greg Golson, Brett Gardner, and Randy Winn against Justin Verlander, you're not exactly set up for success (no offense, Brett.  You know I love ya).
Posted by Unknown at 3:57 PM No comments:

Is Phil Hughes The Best Pitcher In The American League? 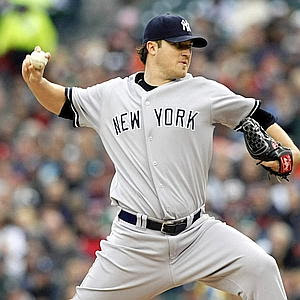 (Photo courtesy of Reuters)
It's a legit question to ask after last night. Having missed all of his previous starts this season, I was looking forward to finally getting to watch Phil work last night on ESPN and he didn't disappoint. Watching Hughes pitch last night, you would have never guessed that this was the same guy who had been so hot and cold over the last couple years that the whispers about whether or not he would ever live up to the hype were growing to a dull murmur.

Ever since his shift to the bullpen last year, and even despite his massive struggles in last years playoffs (of which I was one of the loudest critics), Hughes hasn't just been a different pitcher on the mound, he's been a different person. Everything about how he handles himself on the mound oozes confidence and maturity. He is cool, calm, and consistent in his approach, something that had always been missing from his starts in years past. And the nervous posture and darting eyes that would creep into focus when Hughes started putting runners on base are nowhere to be seen this season. Instead he just licks his fingers, gets the ball back, steps back on the hill, and attacks the next hitter.

His numbers this year more than speak for themselves and they stand up against anybody's in baseball right now. After last night he is 5-0 with a 1.38 ERA, 0.92 WHIP, and 9.0 K/9.  In his 39 innings pitched, he has allowed just 22 hits to the tune of a .165 BAA and a .446 opponents OPS.  He is flat out dominating hitters and after being a bit wild in his first 3 starts, he has made adjustments to cut down on his walks and has walked only 3 batters over 21 IP in his last 3 outings.

But more important than the numbers is the approach. Hughes has finally learned how to pitch smart and at no time was that more evident than last night. From batter to batter and inning to inning Hughes threw the right pitches in the right locations to get the batter to do what HE wanted him to do. He pitched to contact early in the game, getting ahead in the count and forcing Detroit to have to swing with 2 strikes, then just going after them and trusting his defense behind him. But when the time called for it, like the end of the 5th and 6th inning, Hughes changed his approach, getting ahead with the fastball to set up his killer off-speed stuff and go for the strikeout. His poise and command of the situation on the mound this year is absolutely insane. He isn't to afraid to throw any pitch at any time and has learned to recognize trends within a game and stick with what's working, even if his catcher wants to call something different. Hughes is pitching the way that you would expect veterans like A.J. Burnett and Javy Vazquez to pitch, and he's still just 23!!

It seems like Hughes has been around forever, but he is at an age where most young pitchers are still dealing with growing pains and trying to master their stuff at the Major League level. Hughes has gone through the growing pains and the injuries, and he's learned along the way, and this year he has put it all together. He has established himself as not only one of the best young pitchers in baseball, but one of the best pitchers in baseball period and maybe, just maybe, the best pitcher on the Yankees.
Posted by Unknown at 9:44 AM No comments: