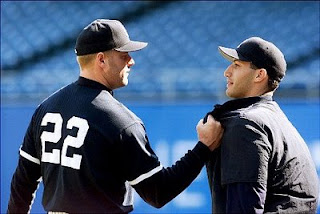 Well Toronto finally decided to show up against the Yankees and made them look awful last night, but there's no reason to even care about last night's game.  Jeter and Swisher sat out, their replacements played sloppy in the field, and the 4 recent September callups handled the bullpen duties after Joba came out of the game.

Essentially the Yankees played their JV team against Toronto last night and they happened to run into Roy Halladay on the night that he snapped out of his funk.  Halladay has been a notorious Yankee killer, and it was only a matter of time before he found his command that he had been missing over his last 3 starts.  That time was last night and with the way he was pitching, he would have shut out the 1927 Yankees, so all you can do is chalk this game up as one the Yankees needed to rest the bullpen and move on to today.

And if you still feel a little uneasy about Joba's performance, take a look at what Paul Byrd did for Boston last night.  Not to mention the fact that Jonathan Papelbon is bitching about being fined for working too slowly on the mound, which could affect his already shaky performance when it comes to putting guys on base.

Any time your team can look horrible for a night and still chop a game off of their magic number, you can live with that.
Posted by Unknown at 10:48 AM No comments: