With all the negative storylines that have dominated the Yankee talk this year, it would be easy to think they were having a down season.  They traded away their best prospect and lost the pitcher for whom they traded him for the season due to injury.  They've had major injuries to their most important relief pitchers and their best starters.  They've gotten inconsistent performances and declining production from key spots in the middle of their lineup.  And they are too one-dimensional without their speedy starting left fielder and rely too much on the home run to score runs and win games.

And yet despite all of that negativity, the Yankees find themselves 23 games over .500 with an MLB-best 57-34 record.  They've won 5 of 6 since the All Star break, 10 of 14 since the start of July, 26 of 35 since the start of interleague play, and 34 of 47 since their last West Coast trip.  They've got a +80 run differential, which is 2nd best in baseball by 1 run, they lead everybody in team wOBA (.348) and wRC+ (115), and are top 3 in the AL in team ERA (3.72) and FIP (3.88).  They've built a 10-game division lead in what is widely considered to be the best division in Major League Baseball, and have already started shoveling dirt on their competition for the division title.

Despite all the negative press from the MSM and occasional nitpicking from the blogosphere, it turns out that the Yankees are actually a pretty damn good baseball team.  They're also in the middle of a stretch where they're playing damn good team baseball.  They're hitting for average and power, getting good work from their pitching staff, and playing solid defense.  Everybody on the 25-man roster is getting a chance to contribute and it seems like everybody is contributing something when their name is penciled into the lineup card or their number is called from the bullpen.  It's good times in Yankeeland right now. 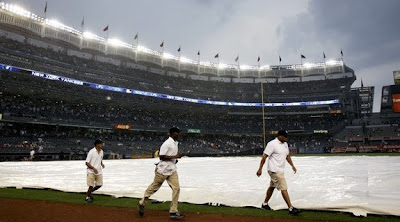 (How the game ended.  Courtesy of The AP)﻿

Does any player better personify the continued irrelevancy of the Toronto Blue Jays in the AL East than Ricky Romero?  Every year we hear about how the Blue Jays are better than they were and ready to take the next step, and every year they underwhelm and finish 4th.  And every year we hear about how Ricky Romero is a future stud young lefty who can be a key to Toronto's rotation improvements, and every year he ends up being the same talented but underwhelming middle-of-the-rotation arm that he is.  He was facing Hiroki Kuroda yesterday in a series finale matinee, and he didn't fare too well at all.

- The offense came out swinging in the bottom of the 1st.  A Derek Jeter double, Nick Swisher single, and Mark Teixeira 2-run homer and it was 3-0, and a Robinson Cano double and Andruw Jones single made it 4-0 before Romero had even recorded 2 outs.

- Kuroda was back on his game after a couple of subpar outings earlier in the month and it showed from the word "go."  He allowed just 1 hit through 3 innings, and got 8 of the 9 outs via the strikeout or groundout.

- After the top of the order got things started, it was the bottom half's turn to build on the early lead.  They tacked a run on in the 4th after Jayson Nix doubled and scored on a Dewayne Wise RBI single.  That duo teamed up again in the 6th for a pair of singles and the Yankees' 6th run of the day.

- He didn't rack up a high K total, but Kuroda finished just as strongly as he started.  He worked around a leadoff double in the 5th and a 2 on/1 out situation in the 7th, and he was in control all day.  He had the sinker working, the slider working, and the splitter working, and the Blue Jays were helpless against them.

- The only thing that was able to slow the Yankees down yesterday was the weather.  And when the rains came in the bottom of the 7th, the game was called and the Yankees had their sweep.  Perhaps more importantly, the bullpen got some rest.