Food For Thought For Tonight

Here is Josh Beckett's line over his last 6 starts against the Yankees dating back to August of 2009:

I'm not even going to bother calculating the ERA+, FIP, or WAR for those 5 starts because I already know they suck.

I will just say good luck tonight, you fat piece of shit.  You're going to need it. 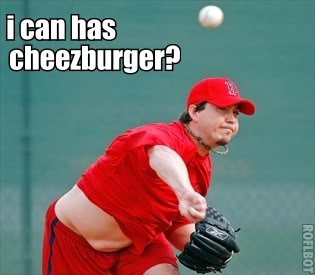 ** UPDATE- 6:15PM: No Horse in the lineup tonight for the Yankees.  He started to feel sick late this afternoon.  Chavez replaces him at 3rd and Cano moves up to the cleanup spot in the batting order.  At least that gives Beckett a slightly better chance.  **﻿
** UPDATE- 10:09PM: No other way to say it, Beckett had it going tonight.  Hey, the sun shines on a dog's ass every now and then, right?  And as good as he was, the Yankees did him some favors by not putting good swings on the hittable pitches he did give them early and then just plain swinging like crap late.  So congrats to Fraud Sawx Nation for climbing out of the cellar tonight.  Call me when you get to .500.  **
Posted by Unknown at 4:29 PM No comments: