"I can't tell you right now when he will be ready," Cashman said. "He is getting treatment every day and feeling better, but he can't run and can't swing the bat." Cash via The Post)

This is bad news for Jeter and the race to 3,000, but probably good for him long term and good for the Yankees.  Guys who have had these injuries all say it can stay with you for the rest of the year, so if Jeter is getting better slowly, the Yanks might as well keep him out as long as it takes to get the calf back to 100%.  And it's not like the team is struh-gull-ing without his ridiculous groundball rate at the top of the order, so there should be no rush to get him back into the lineup.

Francisco Rodriguez To The Yanks?-

"If I am going to be traded, obviously I want the opportunity to close out games, but if it's going to be good teams like the Yankees or the Rays, and it's going to be for two months, I can go out there and help them out."  (Rodriguez, via The Daily News)

No, no, no.  A thousand times no.  I don't care what his numbers are, I don't care what his K rate is, and I don't care about the Yankee bullpen injuries.  I do not want this guy on the team at all.  He isn't better than D-Rob and shouldn't supplant him as the setup man, so there's really no need to sacrifice a prospect, even a lower level one if that's all it takes, to add a piece that isn't needed.  With the number of arms they have available and the fact that Hughes and Colon will be coming back to the rotation within a month or less, the Yankees have the internal flexibility to keep the bullpen stocked.  By now they should have learned their lesson about going after high-priced relievers.  It's just not worth it.

And Francisco Rodriguez is just a dick.  Keep him with the garbage in Flushing where he belongs.
Posted by Unknown at 1:48 PM No comments:

What The Hell Is Wrong With Andrew Brackman? 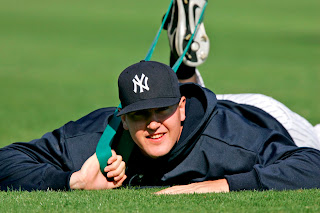 (Does that stretch help him throw more strikes?)
Earlier in the week this post was going to be about how Andrew Brackman's struggles as a starter in Triple-A led to him being demoted to the bullpen and now possibly in line for an '07 Joba-like late season call up.  But then he went and dumped his drawers again last night, giving up 4 hits and 3 ER in less than an inning and continuing what has been an ugly stretch of pitching for him this year.

The 2011 numbers are pretty hideous to look at: 58 IP, 60 H, 45 BB, 6.98 ERA, 5.87 WHIP, and just 3 starts of 6.0 IP or more out of 11.  But it is the trends over his entire MiL career that are even more startling.  Since breaking in 2009 in Low-A Charleston, Brackman's K/9 rate has decreased every year from 8.69 to 7.14 this season.  That number still isn't bad, but a general decrease in strikeouts at each level doesn't predict future success in the big leagues.  The walk rate, which was a problem in '09 then fixed last year, is back up to an insane 6.98 BB/9 this year, and surely the major contributing factor to his horrible performance this year as his BABIP is actually at a career low this season at .306.  Brackman is just putting too many guys on base via the free pass and then paying for it when he does give up hits.

The prevailing thought would be that putting him in the bullpen could help fix the command issues.  Brackman could focus on using just 1 or 2 pitches and have them play up in shorter work.  But so far, that hasn't been the case and Brackman has all but pitched himself out of any kind of consideration for a late season call up in 2011.  Let's not forget that this kid was amongst the group being talked about and looked at for the 5th starter's spot coming out of ST and now he's a bullpen afterthought.  He still has value and could turn things around, but something needs to change with his approach to the game and somebody needs to change it now.  If you can't throw strikes, you aren't going to make it very far.
Posted by Unknown at 7:31 AM No comments: