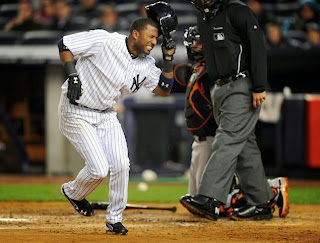 Surprise, Surprise. Yankees Still The Most Valuable MLB Franchise By A Wide Margin

Quick, how much money do you think this down year cost the Yankees in terms of franchise value?  If you answered any amount of money, you're wrong.  According to Bloomberg's latest calculations, the Yankees are valued at approximately $3.3 billion.  That's $1.2 billion more than the next most valuable MLB franchise (the Dodgers), and almost $1 billion more than what Forbes valued them at back in March.  Despite the scaled back payroll and subsequent failure to reach the postseason, stadium attendance that was down from 2012, and TV ratings that were the same, the Yankees are still the gold standard when it comes to professional baseball value and are still practically printing their own money.

While it is good news in the grand scheme of things - I'd much rather the Yankees be the most valuable franchise instead of one of the least - it does present an easy opportunity to revisit the topic of Hal's plans for the team.  If you'll allow me a few minutes to beat a dead horse again, this valuation from Bloomberg and continued growth of the franchise's worth makes this payroll slashing, luxury tax avoiding plan seem all the more ridiculous than it did the first time I heard about it.

Yep.  It's a problem with his wrist.


The word on Tyler Austin is it's the wrist flaring up again. It's not serious, but they wanted to shut him down for precautionary reasons.
— Josh Norris (@jnorris427) October 23, 2013

Oh it's not serious?  That's good news.  Except that if it wasn't that serious you wouldn't be removing him from the fall league so he wasn't at risk of re-injuring it.  Ask Mark Teixeira about those non-serious wrist injuries.  See how well rest and recuperation worked for him.