Being On The Wrong Side Of A Season-Opening Sweep Sucks

I know all the traditional sayings that are going to come out after today- "Still a lot of baseball to play;" "You can't win 'em all;" "Better luck next time;" "It's just one series."  That's all true and I believe all of that.  And I think it was incredibly nice of the Yankees to hand out all those free eggs on the scoreboard today for the kids on Easter Sunday.  But starting the season off getting swept on the road is never a good look, especially not when you're arguably the deepest and most talented team in the Majors like the Yankees are.  The way they lost these 3 games this weekend was disconcerting, as it harked back to last year's ALDS and all the things that did them in.  There was shaky starting pitching, questionable managerial decisions when it came to handling the pitching staff, and the inability of the lineup to get a timely hit or 2 when they really needed one. Given the way that they closed Spring Training, it looked like the regulars were ready to go and would hit the ground running, and instead they came out and laid an egg in the season-opening series.  As a Yankee fan, that's a tough pill to swallow.

There's a difference between losing and losing because you're not playing good baseball, and the Yankees really didn't play good baseball this weekend, which is the biggest thing that's sticking in my craw right now.  None of their starting pitchers pitched into the 7th inning of any game; their pair of lefty relievers combined to allow 3 ER on 3 H and 3 BB in 2.1 IP (2 of the 3 ER against left-handed hitters); their offense combined to hit 5-25 with RISP in the 3 games; and their manager definitely overmanaged his ace starting pitcher in the 1st inning of the 1st game of the year, maybe overmanged his lineup yesterday by inserting the botch-tastic Eduardo Nunez in the SS spot for Jeter, and definitely undermanaged his bullpen yesterday by leaving Rapada in to face the right-handed Evan Longoria.  Whether it's the first 3 games of the season, the middle 3 games, or the last 3 games, that's sloppy baseball.

Jeremy Hellickson was good today, but he wasn't THAT good.  And Phil Hughes, as well as he threw the ball, fell victim to the same things that always kill him.  He wasn't efficient with his pitches, couldn't put guys away with 2 strikes when he needed to, and couldn't get out of innings clean when he got 2 outs.  As for Raul Ibanez being in the lineup in right field today?  Ummmm, yeesh!

(Courtesy of Mock Session, via RAB.)﻿

Everything the Yankees did in this series seemed to be a little bit off and that's just not what you want to see from your team to start things off.

This is not the end of the world, and it shouldn't have anybody jumping off a bridge or ready to throw the towel in on the entire season.  That would be foolish.  But anybody who says they are OK with how the Yankees played in this opening series or accepts that they lost these 3 games is a bullshit liar.  Any fan, rational or irrational, would have been perfectly within their rights to expect the Yankees to win this series, or at least win one game.  And they are perfectly within their rights to be upset about the Yankees getting swept out of Tampa given how they played in the series.  It's over now, it can't be changed, and everybody (players, coaches, and fans) has to move on to the next series.  That being said, the Yankees need to get their shit together and play better baseball in that next series.  They're a step behind everything that's happening right now, and regardless of how many games are left that's not a good way to open the season.
Posted by Unknown at 5:27 PM 1 comment:

Yanks Get Swept To Open The Season

Fuck indeed.
Posted by Unknown at 3:54 PM No comments: 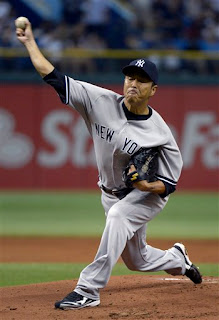 Not exactly the start to the season that everybody was expecting, especially from the starting rotation.

- Hiroki Kuroda wasn't very good in his first start that mattered as a Yankee.  He didn't have good command of any of his pitches and couldn't make a pitch when he needed to.  Like with CC the day before, a lesser pitcher probably gets taken out before the 5.2 innings that he pitched, so at least Kuroda gave the Yankees a little bit of length, but definitely not a strong outing.

- Despite putting 16 runners on base, the Yankees could never string together enough hits to get back into the game after going down 4-0 early and 6-2 after 6 innings.

- The Rays used the shift to their advantage on multiple occasions, getting Teix, C-Grand, and A-Rod to all hit into it for outs.  Hopefully other teams don't start employing this tactic against the Yankees regularly.

- The umpires correctly overturned a HR call to a ground-rule double in the bottom of the 7th after a fan reached over the wall and prevented Nick Swisher from making a catch on a ball hit by Evan Longoria.  Ironically enough, the fan was wearing a Derek Jeter jersey.

- Eduardo Nunez: Went 1-3 w/ an RBI at the plate, but committed the error that led to Kuroda's 2 unearned runs.  Like reader Scott put it: "That guy is a liability" defensively.

- Joe Girardi: Followed up his questionable Opening Day 1st-inning IBB with the equally questionable decision to let Clay Rapada face right-handed hitters in the 7th inning.  Did he think Rapada's career slash against righties was a joke?

- Clay Rapada: In fairness to Girardi, if Rapada doesn't walk Pena and give up a hit to Joyce (the lefties he was in to face), the 7th inning doesn't turn out so bad.

The Yanks will look to salvage the series and avoid being on the wrong end of a sweep to open the season with a day game after a night game.  Phil Hughes faces Jeremy Hellickson this afternoon at 1:40 EST.
Posted by Unknown at 7:59 AM No comments: